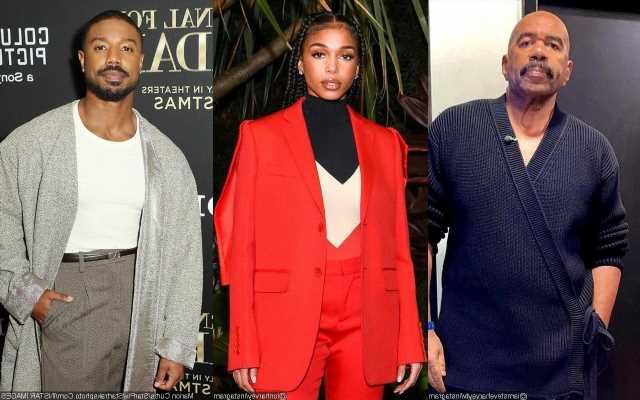 Confirming his stepdaughter’s split from the ‘Black Panther’ actor, the longtime host of ‘Celebrity Family Feud’ believes that the former couple ‘will be fine.’

AceShowbiz –Steve Harvey has confirmed his stepdaughter Lori Harvey and Michael B. Jordan‘s split. Weighing in on the matter, the longtime host of “Celebrity Family Feud” said that he’s “team Lori.”

In the Monday, June 6 episode of his radio show “The Steve Harvey Morning Show”, the 65-year-old presenter said, “I’ve heard about it. I wish him well.” He then showed support to his daughter as saying, “I’m Team Lori 1000 percent.”

“Things happen, it’s hard to be young and in the limelight and have a successful relationship,” Steve opined. “Look, as long as everybody can walk away in peace, be friends … I ain’t heard nobody say they busted no windows or nothing. As long as you don’t put your hands on my daughter, I don’t give a damn what you do.”

Harvey, who has been married three times, went on to joke about his own breakups and how he can learn a thing or two from his daughter. “I’ve got to start learning from my children. Get out early before it cost you something,” he quipped, “I’m going to have to start breaking up on IG [Instagram] because this going to court is costly.”

Steve further said on his show that he believes Michael “is still a cool guy, from what I know.” He then assured that both Lori and the “Black Panther” actor will be fine. “It’s a breakup. I’m pretty sure they’ll be fine. People break up all the time,” he noted.

Also on Monday, a source close to the 25-year-old model/influencer told PEOPLE that she’s “young and wasn’t ready to commit” to Michael. “She is very focused on her career,” the insider added.

The so-called insider further claimed that Lori “realized that they weren’t on the same page” while she and the “Creed” star “were making plans for their future.” The informant continued, “She still wants to have fun and be free. Michael is a great guy. She is sad that their relationship didn’t work out, but she is moving on.”

Lori and Michael went their separate ways after dating for more than one year since November 2020. Of their split, a source told PEOPLE, “Michael and Lori are both completely heartbroken. They still love each other.”

“Michael matured a lot over the course of their relationship and was ready to commit for the long term. He let down his guard with her, opening up emotionally in a romantic relationship for the first time,” the insider went on saying. “They had great times together and brought out the best in each other.”

Though Lori has yet to comment on their split, fans noticed the CEO of SKN by LH took down photos that she had taken with Michael. As for the “Without Remorse” actor, he last posted with Lori in March and still has their couple portraits up.