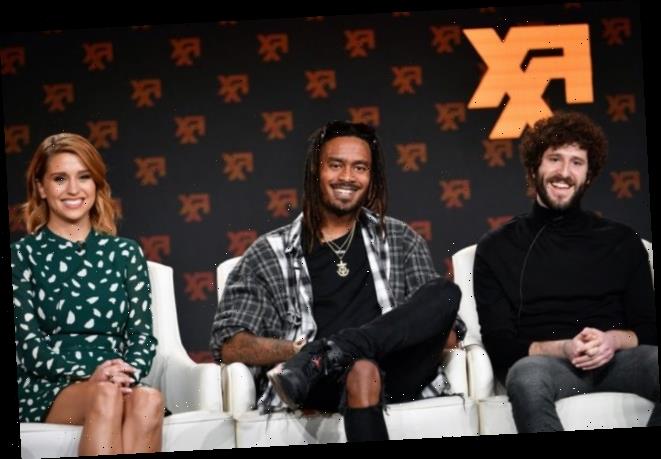 In Dave, the title character dated a loving elementary school teacher, Ally, before they broke up due to his inability to put her before his career. As much of Dave is pulled from rapper and comedian Lil Dicky’s real life, is Ally based on his ex-girlfriend?

The elementary school teacher has been dating the main character, Dave Burd (Lil Dicky), for an undisclosed time before the series begins. While clearly in love, the two experienced intimacy issues as Dave struggled to come to grips with his manhood after he underwent multiple surgeries as a child.

However, she accepted him, resulting in a breakthrough for the couple as well as Dave personally. He later realized how much he loved her when he didn’t take her to a party at Justin Bieber’s house because of his unreasonable concerns about what the pop singer would think.

RELATED: ‘Dave’ Is Coming Back; Here’s What to Expect From Lil Dicky in Season 2

After meeting with several labels about a record deal, Dave accompanied Ally (Taylor Misiak) to her sister’s wedding before making a decision. Therefore, he focused more on his upcoming moves than her, upsetting his girlfriend.

The two got into a huge argument and ended their relationship because Dave refused to put her before his destiny.

Is Ally based on Lil Dicky’s ex-girlfriend, Molly?

Because Dave is based on actor and Lil Dicky’s real life, many fans believe Ally is focused on his real-life ex-girlfriend, Molly. According to Genius.com, he and his ex broke up because he wanted to relocate to California for his music career, and she didn’t want to uproot her life to move with him.

Shortly after releasing his freshman album, Professional Rapper (2015), Lil Dicky did a Reddit AMA and answered fans’ questions. Someone asked how difficult it was to end the relationship and if he thinks it’s worth it now.

The rapper explained he “knew that I had to pursue my dreams before anything.” Additionally, he noted that he and Molly weren’t ready to marry and doesn’t think he “would’ve been able to put her in front of me accomplishing my dreams.” While breaking up wasn’t hard, the rapper acknowledged “living with the realities of the outcome” is the tricky part.

In Episode 9, Ally told Dave she didn’t want to be in a relationship where she comes second, and he told her he had no interest in not full-heartedly chasing his dreams.

In his song “Molly” featuring Brandon Urie, the rapper noted that he always chose his rap career over his ex, which was similar to what happened with Ally.

Additionally, he raps about listening to their “autotune in my mike phone,” and the episode opened with the two making a song before they left for the wedding.

In a Deadline virtual panel, Lil Dicky noted that Ally wasn’t necessarily based on his ex-girlfriend, but he acknowledged he also had a girlfriend at the beginning of his rap career.

However, his relationship and career “couldn’t go in the same direction,” so they broke up, similar to what happened in Dave. When speaking about the emotional scene, he explained he wanted Ally and Dave’s “relationship to be put to the test” and do it so that viewers “didn’t see it coming.”

RELATED: Why Kourtney Kardashian Did a Cameo On Lil Dicky’s FXX Series ‘Dave’

The rapper also noted he “still gets teary eyed” at the end when Dave drove home from the wedding alone because it’s “about my life” and “so well-shot.”

While the specifics about Ally, including her occupation as an elementary school teacher, might have been fabricated, Lil Dicky did have a girlfriend at the beginning of his rap career that he loved very much and likely cares about still.

However, he could not continue the relationship due to his desire to be the best in the world.