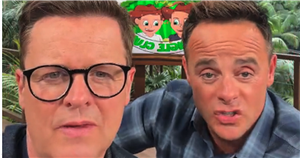 I'm a Celebrity.. Get Me Out of Here! host Ant McPartlin has hit back at a fan who suggested Michael Jackson should take part in the ITV show.

Ant and his co-host Dec Donnelly took to Instagram Lives as usual after Wednesday's episode of the reality series.

They often ask their followers who they'd like to see in the jungle next year.

However, things turned awkward as they spotted that one social media user suggested the Thriller singer joined the show.

After spotting comment, Ant said: "One has suggested Michael Jackson on next year.

The King of Pop passed away 13 years ago at his Los Angeles home.

Another fan suggested that Queen legend Brian May did the show and Ant agreed with the suggestion.

He said: "I'm not even going to shout at that one because it's a good one."

It comes after Babátundé Aléshé was the fifth contestant to be axed from the 2022 series.

The comedian and Celebrity Gogglebox regular received the least amount of public votes and has been told to leave the jungle by Ant and Dec.

Comic Babatúndé told the Geordie duo that he'd like to see Hollyoaks actor Owen Warner to win the series.

He said: "Owen, he is brave. He is a brave soul and he is a good, good friend. I can say so much, he was my closest friend in there."

When asked to discuss his experience, he explained: "Don't get twisted. I loved it in there, but I needed my freedom.

"It has been crazy, being in it is a different experience to watching at home. Spending two and a bit weeks in there it is hardcore. The hunger, all we do is talk about food."

Babatúndé also admitted that he worried his appearance on the show might go wrong when he failed to do The Ledge trial before he even got into camp.

He said: "I thought it was going to be a trainwreck. I didn't think I would be able to do a trial. Even the ones I was successful in I dreaded.