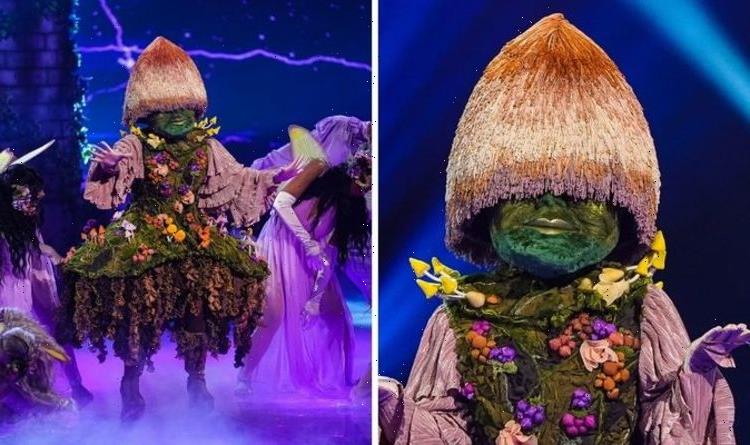 Tonight, the remaining celebrities will take to the stage in a bid to impress the judges and keep their identity a secret. Mushroom, Robobunny, Traffic Cone, Rockhopper and Panda will compete against one another, as the judges use the clues given to try and rumble their identity.

Over the last couple of weeks, fans have shared their thoughts on who they think Mushroom could be, and many believe they have worked out that Charlotte Church is behind the mask.

In an exclusive interview with Express.co.uk, Uberkinky’s body language expert Ruby Payne shared her thoughts on who she thinks the contestant could be.

“Mushroom has been the singer that has captivated everyone watching this year; who are they? There’s little doubt that Mushroom is a talented performer and a singer.

“Mushroom is obviously a pro, but the clues being dropped now point firmly towards Church.

“Mushroom’s costume throws back to the reverse side of Church’s fourth studio album Enchantment.

“And the latest clue comes in the form of a fake number at the end of Mushroom’s VT: 345997. In letters, the number spells out the Welsh word ‘Eglwys’.

“Which translates to ‘Church’ in English. There have also been nods to TV show Heartbeat, which Church starred in back in the day,” she revealed.

At the weekend, many fans shared their suspicions that Mushroom’s identity was Charlotte Church after they spotted the same hand gesture.

After Mushroom’s performance, judge Mo Gilligan said: “There was another clue that kind of came to me as everyone was speaking.

“Someone said about she’s been in the press, and I felt like she was in the tabloid press back in the day, so I think Charlotte Church.”

A clip then played of Mushroom thanking people for the birthday wishes, to which Mo revealed: “I think it was Charlotte Church’s birthday recently.”

Mushroom then held their pinky finger to their lips, which eagle-eyed fans realised was a small trait of Charlotte’s they had seen before.

Charlotte starred on the hit ITV show Catchphrase with host Stephen Mulhern, where she could be seen making the exact same hand gesture as Mushroom.

Spotting the clue, @ThatBigGAFan20x wrote on Twitter: “NO. WAY. CHARLOTTE CHURCH LITERALLY DID THE SAME THING AS MUSHROOM DID.

“All the clue linking up, the song clue, the voice is literally her and now THIS!”(sic)

@LadySG also picked up on the fact she has a new TV show coming out and said: “Charlotte Church has a new TV series, so doing #TheMaskedSInger would fit in her public profile.”

The clues Mushroom gave the judges and viewers on Saturday night were: “Last time, I drove the panel insane.

“As they struggled to dig up any guesses that were close to who I really am, we’re more than halfway into this competition.

“While you might think that odour is a sweet smell of success, it’s actually ‘Interest’ . It’s the fragrance that asks the question: Why are you so obsessed with me?”

The Masked Singer airs Saturday at 7pm on ITV.