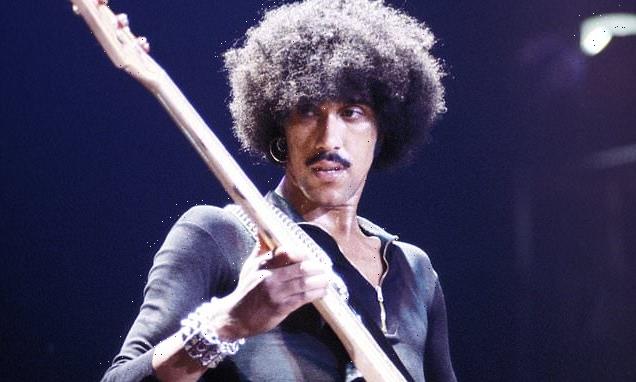 ADRIAN THRILLS: Dust off those leather trousers – the boys are back in town with greatest live album ever

Verdict: Still in love with Lizzy

We’ve been live and dangerous for you at the Rainbow’, says Phil Lynott on one of the 63 unreleased tracks added to a mammoth new edition of Thin Lizzy’s celebrated 1978 live album.

He wasn’t kidding. By the end of the 1970s, the group he launched at the start of the decade were one of the world’s most febrile, formidable rock acts.

With the charismatic Dubliner at the helm — and hits such as The Boys Are Back In Town in the repertoire — Live And Dangerous is ranked as the greatest live album ever by both Classic Rock and NME. And, while a recording can never replicate actually being there, this one comes closer than most. 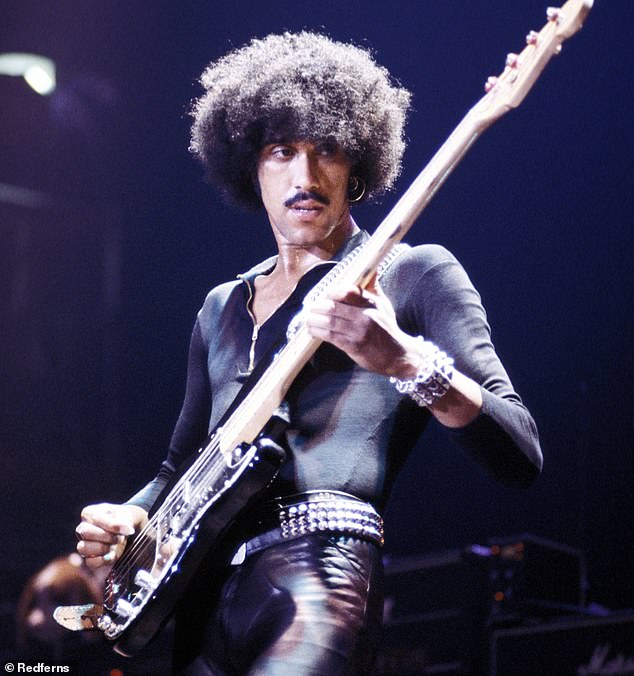 We’ve been live and dangerous for you at the Rainbow’, says Phil Lynott on one of the 63 unreleased tracks added to a mammoth new edition of Thin Lizzy’s celebrated 1978 live album

Recorded in London, Philadelphia and Toronto in 1976 and 1977, the original double LP spent three months in the UK Top Ten and was kept off top spot only by the Saturday Night Fever soundtrack. Time has only amplified its power: the brio of Lizzy’s impeccably drilled musicianship is something to behold.

The new package, overseen by guitarist Scott Gorham and available as an 8-CD box set (£67) as well as on streaming platforms, gathers together all six of the shows pooled for the initial LP. Also included is a 1978 London gig, plus a remastered version of the original album. Despite the inevitable repetition (and there’s a lot of it), it’s a rewarding exercise — not an album to listen to in a single sitting, but one to be dipped into, one show at a time.

This reissue also sheds fresh light on one of rock’s great debates. There have been suggestions that Live And Dangerous isn’t strictly a live album at all. Producer Tony Visconti, who delayed work on David Bowie’s Lodger to mix the original selection of songs, has claimed large parts of the 1978 album were spruced up with studio overdubs.

The band have always denied skulduggery, admitting only that some off-key backing vocals were replaced and a few technical glitches fixed. Without settling the controversy, the gigs reproduced in full here support the band’s side of the argument by reiterating what a tight, professional outfit they were onstage. 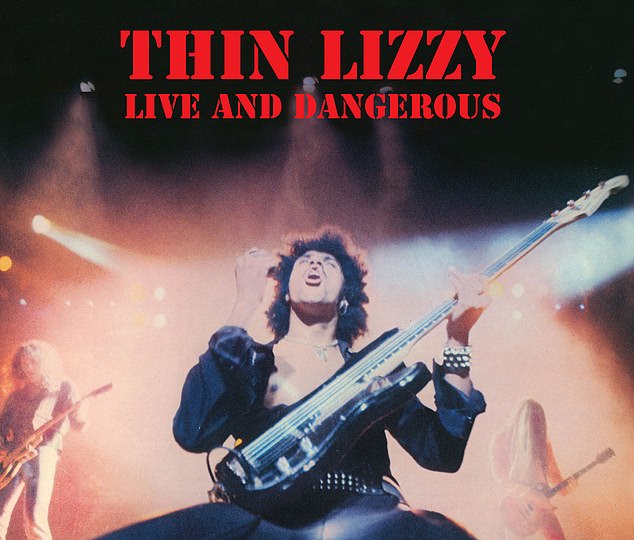 Behind singer and bassist Lynott, their main calling card was the guitar interplay of Gorham, a Californian, and young Scot Brian Robertson. They synchronised their playing to produce their galloping, hard-rocking solos in tandem, creating Lizzy’s fabled ‘twin harmony’ wall of sound. It’s telling that both were introduced onstage as lead guitarists.

The album was also Lynott’s finest hour. With his crotch-hugging leather trousers and studded wristbands, the frontman had a piratical air and an abundance of star quality. Beneath the macho posturing, he was also a gifted songwriter with a golden voice and a soulful Celtic heart. 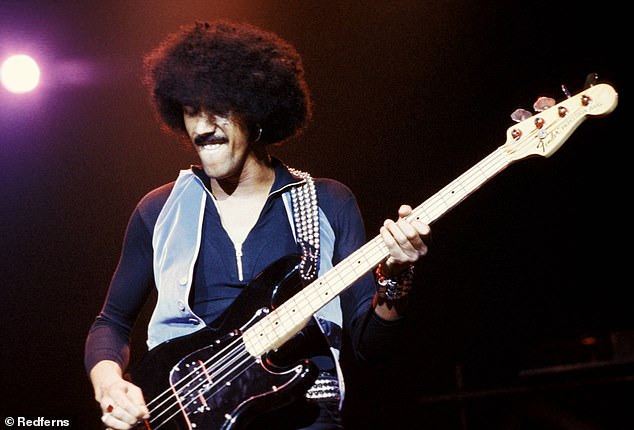 The new package, overseen by guitarist Scott Gorham and available as an 8-CD box set (£67)

Among the high points are blue-collar rocker Southbound, breezy pop song Dancing In The Moonlight and the confessional Still In Love With You, a power ballad so romantic it was covered years later by Sade. Of the previously unheard tracks, a version of 1977’s Soldier Of Fortune, recorded in Philly, is one of several standouts. Lizzy never quite recaptured this momentum. Guitarist Robertson had to sit out an American tour with Queen after injuring his hand in a scuffle outside a London club. The rock ‘n’ roll lifestyle also took its toll on the other members.

Here, though, they were in their prime. And, with heritage albums by Elton John, Abba, Queen and Fleetwood Mac among the 20 biggest sellers of 2022, this offers another fascinating glance back to the heyday of classic rock. 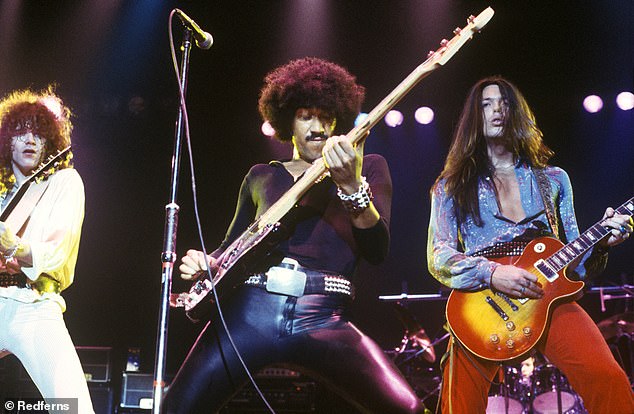 Included in the package is a 1978 London gig, plus a remastered version of the original album

Their reputation, already burnished by a dynamic live show, should be further enhanced with today’s release of Rush!, their third album overall and the first sung primarily in English. There’s nothing massively innovative on display. With Swedish mastermind Max Martin co-producing, the band race through short, sharp songs that waste little time in reaching their TikTok-friendly hooks. 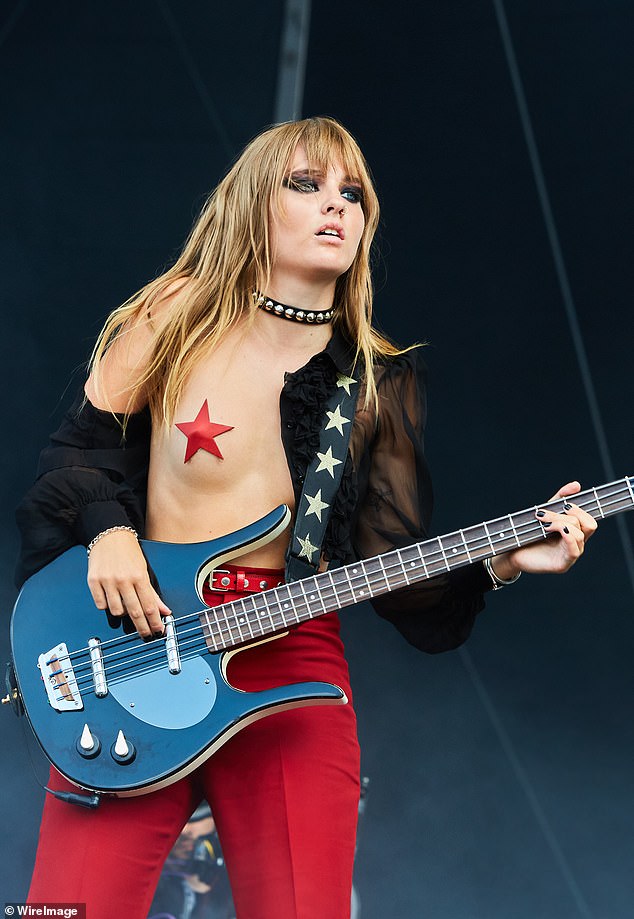 Maneskin’s reputation, already burnished by a dynamic live show, should be further enhanced with today’s release of Rush!, their third album overall and the first sung primarily in English. Pictured: bassist Victoria De Angelis from the band

Bassist Victoria De Angelis adds a heavy rumble to Gasoline. Rage Against The Machine guitarist Tom Morello guests on Gossip. Influences are easy to spot. Maneskin covered Franz Ferdinand’s Take Me Out on the Italian X Factor in 2017, and there are further debts to the Glasgow indie-rockers in the angular grooves of Feel. Kool Kids nods to the Pixies. But, as they sing on the latter: ‘We’re not punk, we’re not pop, we’re just music freaks.’ For a group all in their early 20s, they seem unusually fatigued by fame, with shallow celebrity culture a particular target. ‘Sip the gossip, drink till you choke,’ snaps frontman Damiano David on Gossip.

But the onus is largely on having fun, even if that occasionally spills over into gimmickry, as on the novelty number Bla Bla Bla, a song that (despite some fruity language) could easily have been tailor-made for Eurovision . . . or, at least, Eurovision as it was, before Maneskin changed the game.