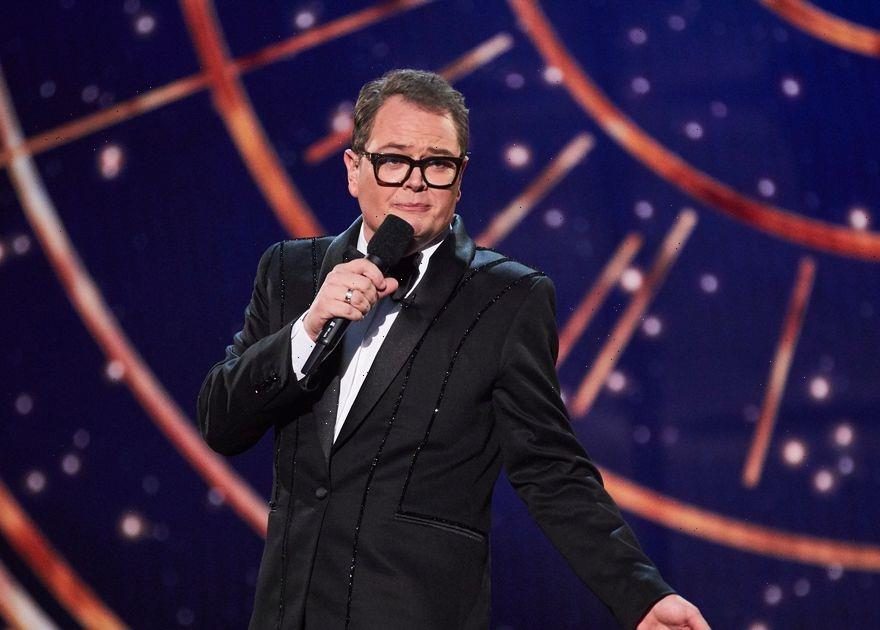 Alan Carr has divided viewers after making a joke about Prince William and Kate Middleton while hosting the Royal Variety Performance.

The comedian, 45, hosted the annual event, which took place at the Royal Albert Hall in London.

Alan brought his signature cheeky sense of humour as he fronted the show, which aired on ITV on Sunday 19 December.

During the pre-recorded performance Alan couldn't resist making a joke to the guests of honour; the Duke and Duchess of Cambridge.

As his hosting stint went underway, Alan stopped himself and told viewers: "Hold on, where are my manners?

"We are, of course, incredibly honoured to be joined by their Royal Highnesses The Duke and Duchess of Cambridge tonight."

Alan bowed as the audience cheered to greet Prince William, 39, and his wife Kate, also 39.

He then added: "I won't tug forelock, I'm at that very delicate stage of hair loss where it might actually come off," as the audience giggled.

Alan, who went topless during the show, then complimented William's wife Kate as he said: "Mam, may I say you look absolutely beautiful tonight."

The audience cheered as Alan told the Prince: "Sir, I'm sure you don't know who I am but don't worry I'm not hitting on your wife."

Prince William and Kate both looked amused as they laughed along with the audience. But, the quip didn't go down well with viewers at home.

One viewer wrote on Twitter: "FFS! This is unbearable. How did Alan Carr get the job? What an unfunny, embarrassment he is. Even his parents are squirming. #RoyalVarietyPerformance."

"@RoyalVariety blimey didn't realise how funny Alan Carr isn’t. This is so boring," another added.

And a third said: "Who the f**k booked Alan Carr for #TheRoyalVarietyPerformance? His jokes are as old as Rod Stewart’s hairstyle".

But, some revealed how much they enjoyed Alan's hosting stint as one said: "Watching the Royal Variety Show. Alan Carr is hilarious".

Another added: "Alan Carr is indeed funny tonight on the Royal Variety Show."

As a third wrote: "#AlanCarr brilliant on Royal Variety".

It comes after Alan previously admitted saying the wrong thing while hosting the prestigious event.

He confessed on Good Morning Britain: "Oh, of course, you worry. My mum and dad were there as well, it was just so stressful.

"I'm so glad it went well. And the thing is, I'm so glad I saw them laughing. Because, of course, you don't look up at the royal box when you're performing.

"But when I actually first appeared at the Royal Variety back in 2005, there's actual footage of the Queen laughing at my Tesco Clubcard joke!"

For more gossip on all your favourite stars sign up to our daily newsletter here.