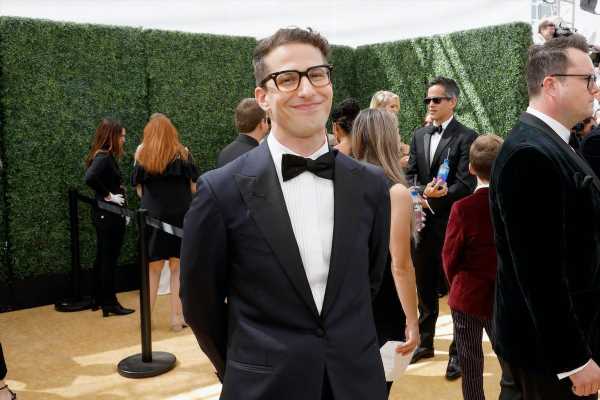 Brooklyn Nine-Nine star Andy Samberg and Late Night with Seth Meyers host Seth Meyers met while cast members on Saturday Night Live. In the decade and a half since, the two friends have shown their affection for each other publicly.

When FOX canceled Brooklyn Nine-Nine, Meyers was instrumental in getting the show picked up by NBC. Both have written for the other when they have hosted award shows like the Emmys and Golden Globes.

Despite being good friends, Meyers and Samberg have their differences, mainly over Meyers’s Italian Greyhound, Frisbee. 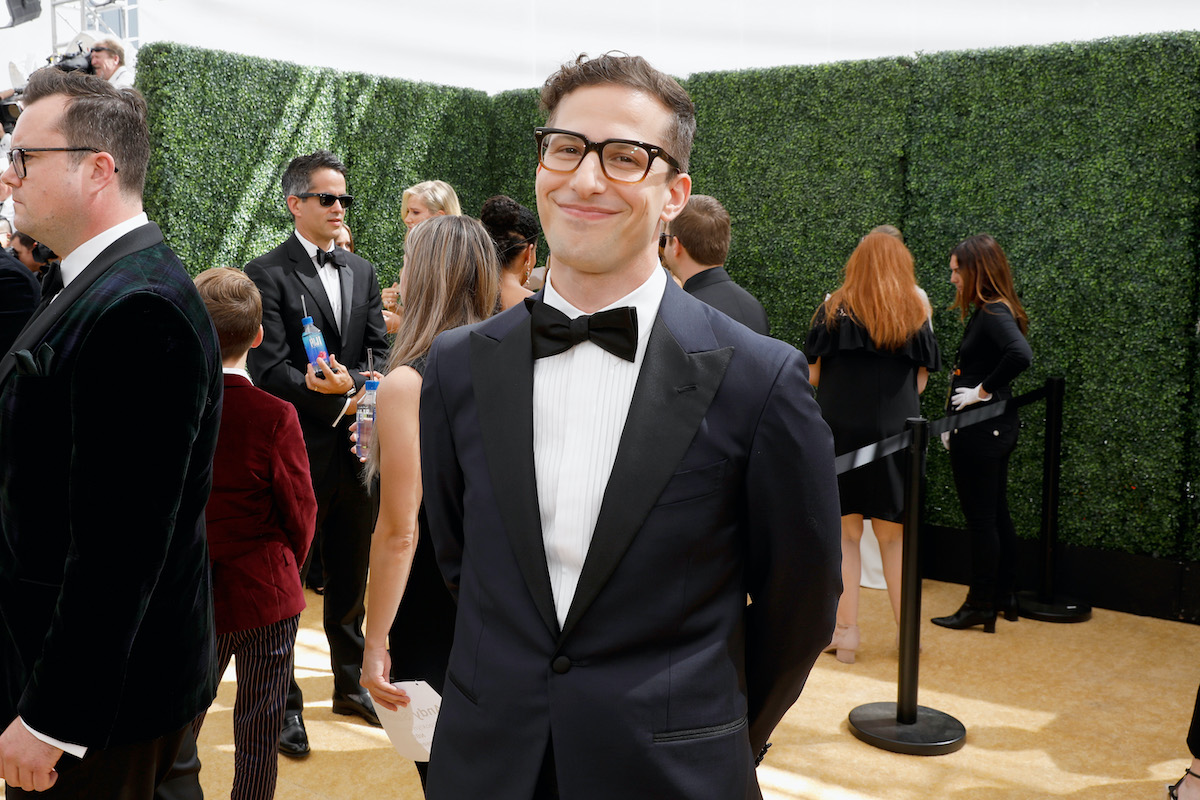 For seven years, Samberg has appeared on Meyers’s show and ragged on Frisbee. The first time Meyers brought up his friend’s dislike of his dog, Samberg didn’t know it would be talked about on the show.

‘I have an adorable dog named Frisbee,” Meyers told Samberg on a March 2014 episode. “You have a dog,” the Brooklyn Nine-Nine star countered.

“You met my dog when she was basically a two-month-old puppy and you basically said ‘No, Thank you.’” Meyers laughed

“Yeah. Well. Frisbee is a dog, who to me, looks kinda rat-like. And I lived in New York a long time and I don’t get down on rats,” Samberg remarked before Meyers rebutted.

“I believe you told my wife that you had seen rocks that were cuter than Frisbee.”

“This is so awful,” Samberg chuckled in response. “To my credit, when I said that to her, I never thought you’d be saying that I said it on national television.”

Each time Samberg has appeared on Late Night, he took the comedy bit farther. Once, Meyers recounted when Samberg sent back his family Christmas card because the dog was in it with Meyers’s two boys. 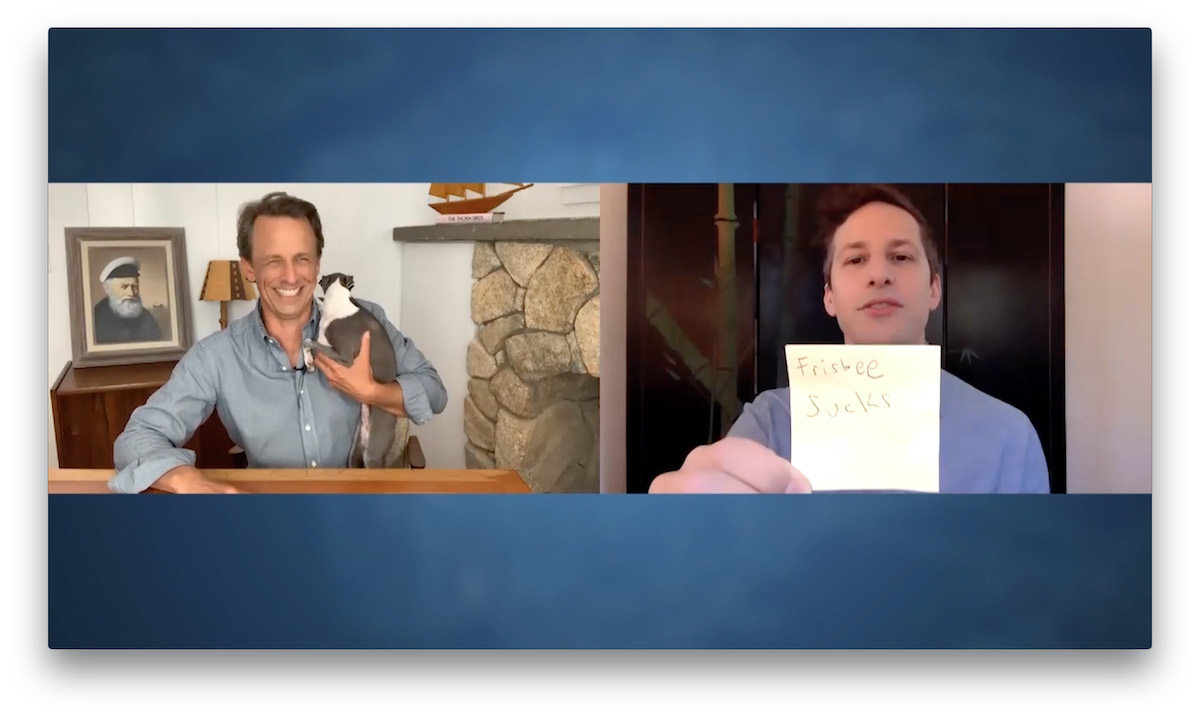 “You might as well have sent me anthrax,” Samberg said, pointing at the picture of the dog in a knitted reindeer hat. “Look at this piece of s—! I had to hire a cleaning crew ‘cuz of all the barf in my house.”

He added, “I’ve been walking home in New York drunk at four in the morning and seen rats I like more than Frisbee.”

Other celebrities have jumped in on the Samberg/Frisbee feud, including Ellie Kemper, Sarah Paulson, Holland Taylor, and Olivia Munn, to various degrees of support for both parties. 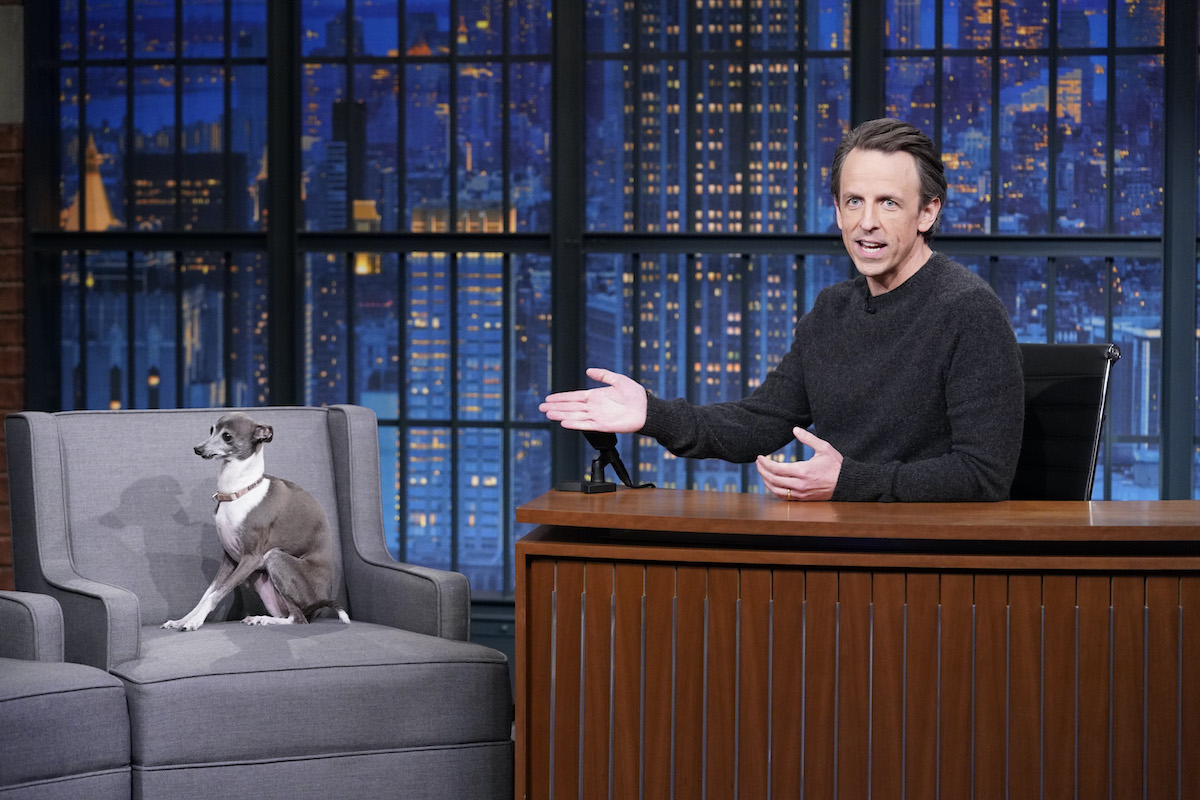 In early 2021, Meyers and Samberg’s SNL colleague Colin Jost came on to Late Night. While talking to Meyers, Jost received several text messages from Samberg, to which he read aloud.

“Also, Frisbee sucks, right?” Jost read in Samberg’s place at the end of the text chain. “‘The dog.’ He specified the dog. ‘Please respond. Spinning out. Need to know you hate Frisbee.”

Pretty much everything Samberg has appeared on Late Night with Seth Meyers, he has insulted Frisbee Meyers. It doesn’t look like it will end anytime soon.

Samberg returned to the show in early Aug. 2021 to promote the final season of Brooklyn Nine-Nine and surprised Meyers with a bit comparing Frisbee to the coronavirus (COVID-19). At least everyone is laughing, though.