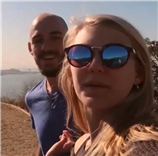 We have an update on the tragic case of Gabby Petito, the young blogger who was found dead this summer after having gone missing for weeks; and Brian Laundrie, the 22-year old’s boyfriend who many believed murdered Petitio.

According to attorney Steven Bertolino, aundrie died from a gunshot wound to the head.

His death has been ruled a suicide.

“Chris and Roberta Laundrie have been informed that the cause of death was a gunshot wound to the head and the manner of death was suicide,” said Bertolino in a statement.

“Chris and Roberta are still mourning the loss of their son and are hopeful that these findings bring closure to both families.”

The news comes about five weeks after partial human remains of the 23-year-old fugitive were discovered in Myakkahatchee Creek Environmental Park … near Laundrie’s last known location.

Laundrie had been named a person of interest in the disappearance of his fiancée on September 15, although the police never came out and listed Laundrie as a suspect.

After Brian was confirmed dead, Bertolino also spoke out on behalf of the family, telling the public:

“Chris and Roberta Laundrie have been informed that the remains found yesterday in the reserve are indeed Brian’s.”

“We have no further comment at this time and we ask that you respect the Laundrie’s privacy at this time.”

Petito and Laundrie had spent several weeks traveling across the country in a white van together, documenting their adventures on YouTube along the way.

However, on September 1, Laundrie returned to his parents’ Florida home — without Petito.

For the first week of Petito’s missing persons investigation, Laundrie’s mother and father refused to cooperate with authorities, directing all questions to their lawyer.

A short while later, though, the family opened up to the FBI about how Brian had also gone missing.

Then, on September 19, Petito’s corpse was discovered in Grand Teton National Park.

Her death was ruled a homicide by the county coroner, who said she died from strangulation.

Days after that, even as his whereabouts remained unknown, the U.S. District Court of Wyoming issued a warrant for Laundrie’s arrest in relation to activities that occurred after Petito’s death.

“We’re just hoping that through our tragedy losing Gabby, that in the future, some good can come out of it, that we can help other people who may be in a similar situation,” Gabby’s stepfather, Jim Schmidt, told reporters during a press conference at her memorial service on September 26.

“We need positive stuff to come through this tragedy that happened.

“We can’t let her name be taken in vain.