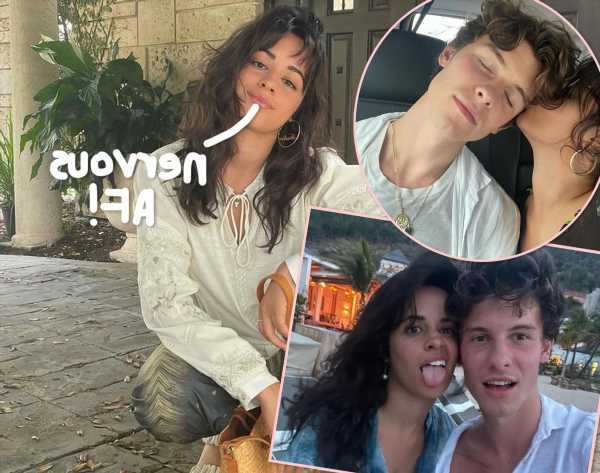 Camila Cabello had all the butterflies before her first date with Shawn Mendes — so much so that she needed a little liquid courage to kickstart the night.

On Wednesday, James Corden brought the songstress and their other Cinderella co-stars Idina Menzel and Billy Porter to The Late Late Show With James Corden for some Carpool Karaoke. Thankfully they stayed inside the car this time…

Of course, with some super talented singers, the 43-year-old host jam-packed the segment with show tunes, everything from Mamma Mia! to Dreamgirls. It’s a lot of fun.

And at one point, Camila opened up about her love life, explaining to Idina how important her most famous role was to the beginning of her relationship. Apparently the 24-year-old was so nervous for her first date with Shawn that she actually sang Defying Gravity from Wicked — the signature song of Idina’s Elphaba — to hype herself up!

Well, that and guzzling down two shots of tequila. She explained:

“I swear to God, before Shawn and I’s first date, I was so nervous, I took two tequila shots and sang Defying Gravity over and over.”

Awww! Camila may have to thank the Wickedly Talented Adele Dazeem for helping her to connect with her real-life Prince Charming!

So why was she so nervous?

Although the couple had been flirting with the idea of romance for a while, the singer claimed she still felt a lot of pressure to make sure everything went well, saying:

“So Shawn and I had been talking for a couple weeks now, like, ‘Oh my God, I’m so excited to see you. I can’t wait to kiss you.’ All that stuff, you know what I mean. And so obviously, there’s just a lot of stakes before the first time. I’m like, ‘Oh my God, do I kiss him when I see him? I don’t know!’”

Cabello and Mendes first collaborated in 2015 for her debut single I Know What You Did Last Summer and later released Senorita before stepping out as a couple in the summer of 2019. So it is safe to say that they were well-acquainted before becoming an item — but that did nothing to ease the nerves once she knew kissing was on the table! She recalled:

“So he’s about to come over, and I’m so nervous, I just can’t take it. My dad is there, I’m like, ‘Pour me two tequila shots. Just do it.’ And I just sang Defying Gravity.”

What a way to start the night! Obviously, the group then had to break out into the show-stopping number, with Corden quipping at the end:

“Oh my God, if Shawn Mendes knew that was happening the second he walked into his first date…”

To which Camila responded:

Two years later, and here they are! The duo is still going strong! You can ch-ch-check out the entire Carpool Karaoke video (below):

Reactions to Camila Cabello’s story? Have YOU ever been so nervous for a date you’ve had to do shots and put on a Broadway jam?? Let us know in the comments (below)!