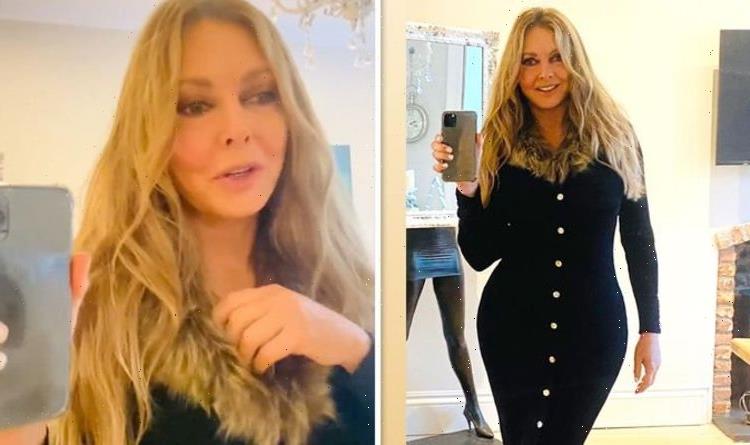 Carol Vorderman admits she's been 'out of sorts'

Former Countdown presenter Carol Vorderman, 60, went on social media today to share her clothing crisis with fans. The star reached out to her 188,000 followers to ask for opinions on her latest fashion choice.

Carol posted a poll to her Instagram Story alongside a picture of her new, figure-hugging outfit.

The TV personality could be seen wearing a flattering black, long-sleeved maxi dress featuring a trail of buttons.

She also sported a pair of chunky black lace-up boots, which helped offer a bit of edge to the look.

Carol’s followers thankfully thought she had made the right choice, with over 71 per cent voting to keep the boots so far.

The celeb also posted a video where she spoke about her “cosy” new outfit.

Conscious of highlighting that she does not wear real fur, she added the caption: “All warm and cosy today #fakefur”.

In the video she could be seen fluffing up her faux fur collar, saying: “Got the old fake fur collar on today.

“Fluff it up a bit. It’s nice and warm and cosy. It’s like wearing a scarf.”

This is not the first glamorous outing Carol has made in recent months.

The BBC Radio Wales host has actually been sticking to a jam-packed schedule making various appearances up and down the country.

‘Are they mad?’Jeremy Clarkson angry over new driving laws [NEWS]

“I was a little bit out of sorts this morning.”

Carol went on: “I think I’m just knackered if I’m honest. For two months I’ve been spending a different night in a different city, a different hotel, different bed.

She continued: “Anyway, I thought I’d get a bit of fresh air. I went around the woods for a little bit and now I’m by the bridge.

“Some people know it as the Clifton Suspension Bridge in Bristol. I know it as my bridge.”

“Happy Monday,” Carol concluded, before going on to post a jaw-dropping snap of her latest bodycon dress.

Carol revealed why she was all dressed up in the caption, writing: “Off to give a little speech #Bristol.”

The glamorous math whizz concluded her story by congratulating Pride of Britain winner Max Woosey, who celebrated spending his 600th night camped outside to raise money for North Devon Hospice.