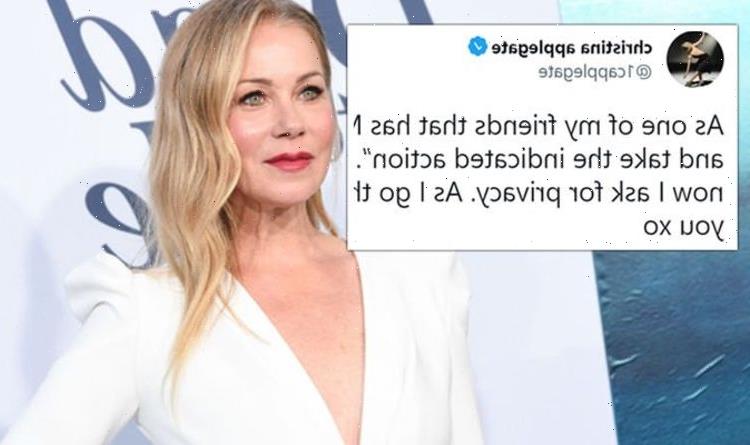 Dead To Me: Christina Applegate stars in Netflix comedy

Married with Kids star Christina Applegate has broken her silence on her health diagnosis. The actress took to Twitter to make the candid admission and was inundated with support online.

The 49-year-old revealed she had been diagnosed with multiple sclerosis a few months ago.

Christina explained it will be a “tough road ahead” as she addressed her health concerns.

Taking to the micro-blogging site, the Hollywood star opened up about her recent diagnosis.

Christina penned an emotional message in view of her 1.4 million followers.

She began: “Hi friends. A few months ago I was diagnosed with MS.

“It’s been a strange journey. But I have been so supported by people that I know who also have this condition. It’s been a tough road. But as we all know, the road keeps going.”

“Unless some a**hole blocks it,” Christina added.

“As one of my friends that has MS said, ‘We wake up and take the indicated action’,” she tweeted.

Christina finished: “And that’s what I do. So now I ask for privacy. As I go through this thing. Thank you xo.”

The actress was swiftly inundated with comments as social media users offered words of encouragement.

One wrote: “You are surrounded with our love and good wishes. I hope you can feel it.”

Another penned: “You’re the strongest woman. You will get through it. We’re all rooting for you.”

“We’re all sending our support and as you go through this privately just know you’re not alone,” a third wrote.

A fourth added: “Sending you support and good energies. Take care, you’ve got this.”

Multiple sclerosis (MS) is a condition that can affect the brain and spinal cord, causing a wide range of potential symptoms, including problems with vision, arm or leg movement, sensation or balance.

It’s a lifelong condition that can sometimes cause serious disability, although it can occasionally be mild.

Symptoms can include fatigue, difficulty walking, vision problems and muscle stiffness, according to the NHS.

Christina has been a firm fixture on TV and movie screens since the late 1980s, when the then-15-year-old actress was cast as teenager Kelly Bundy in the envelope-pushing Fox sitcom Married… with Children.

She has also appeared on the big screen appearing opposite Will Ferrell in the iconic cult comedy Anchorman.