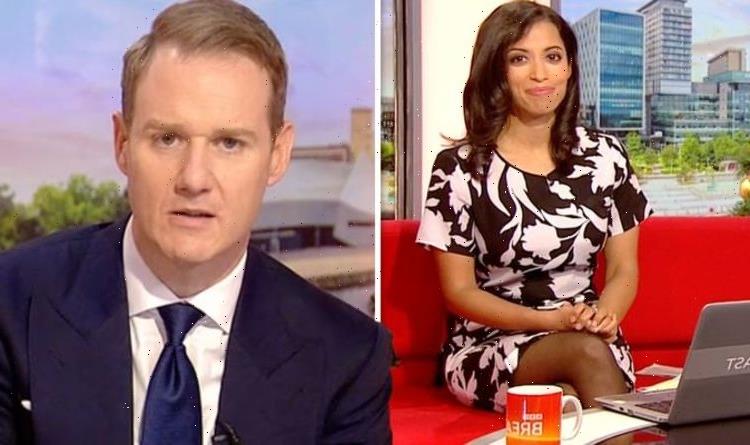 Dan Walker has been full of praise for Luxmy Gopal, as she joined him to front BBC Breakfast this morning. The Strictly Come Dancing star usually hosts the show with Sally Nugent, 50, but Luxmy took her place on the famous red sofa today.

It comes after Dan took to Twitter yesterday to complain about his “lonesome” appearance on BBC Breakfast.

Fortunately, the presenter seemed overjoyed to have a “friend” for today’s episode.

“Back on #BBCBreakfast with @luxmy_g.

“We’re here until 915 so feel free to grab a brew / turkey sandwich and join in.”

Dan also shared a photo of himself and Luxmy sitting together in the studio with Christmas trees decorating the background.

Fans were quick to gush over Luxmy’s stint on the red sofa, with Twitter user Charlotteukcity writing: “What a treat this morning has been Luxmy!

“You totally fit being a morning Breakfast presenter. A total natural.”

The fan then responded: “Yes, she’s always been great! So happy that more people will be able to see that for themselves, with Luxmy being on Breakfast.”

Dan previously lamented that he was “flying solo” on BBC Breakfast in a rare situation yesterday.

Dan wrote: “Anyone fancy a job on the sofa this morning?

“Enjoy the leftovers,” he added.

The sports reporter added a snap of himself sitting alone on the red sofa, wearing a festive red tie.

He later added in another post: “I’m a lonesome cowboy on the @BBCBreakfast sofa and am working my way through some mince pies and miniature heroes,” before encouraging his fans to tune in.

Dan usually presents the programme between Monday and Wednesday with Sally Nugent, but the Christmas period has seen this routine change slightly.

It was confirmed earlier this year that Sally was replacing Dan’s former co-host Louise Minchin, following her exit from BBC Breakfast in September.

Sally shared her excitement over the news in a statement at the time.

She said: “I’m absolutely thrilled to become the new presenter of BBC Breakfast and bring the nation the latest news, top entertainment guests and stories that matter every week.”

The presenter added: “It’s an honour to take the reins from Louise.”