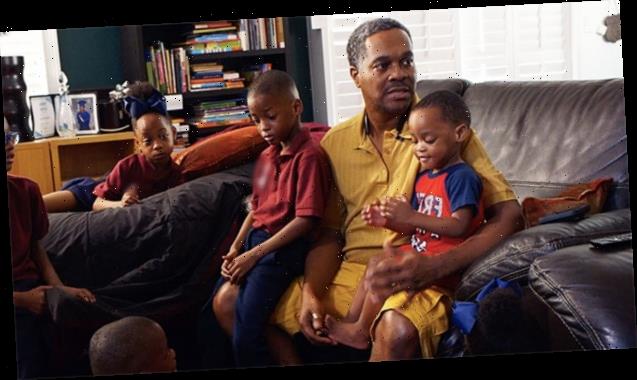 Deon has his hands full while Karen is 24 weeks pregnant and in the hospital. In this EXCLUSIVE preview of ‘Doubling Down With the Derricos,’ Deon reaches out to his mom for help with the kids.

Karen Derrico is in the hospital on bed rest while 24 weeks pregnant and expecting triplets. This means Deon Derrico is trying to manage a household with 11 kids all on his own. “Already it’s very hectic around here,” Deon says in our EXCLUSIVE preview of the Aug. 18 episode of the new TLC series Doubling Down With the Derricos. “To run the household, that’s a lot. It really stresses you all over the place.”

Even his kids aren’t fully convinced he’s going to be able to handle everything. “Dad’s never going to pull this off,” Denver, 7, says. One of the kids asks Deon when their mom will be back. He can’t give an answer because he just doesn’t know yet.

“I’m trying to figure how I’m going to balance between work and home with Karen being in the hospital, but I haven’t come up with that yet,” Deon continues. Deon is overwhelmed, to say the least. He has 11 children with all different activities, so he knows that he has to come up with a better plan in order to get everything done with the kids and his job. And then he thinks of Gigi.

Gigi is Deon’s mother, who lives in Detroit. “My plan is to get her out here ASAP,” Deon admits. “Having Gigi would be perfect. Gigi does hair, she cleans, she cooks, she plays with them. Whatever has to get done.”