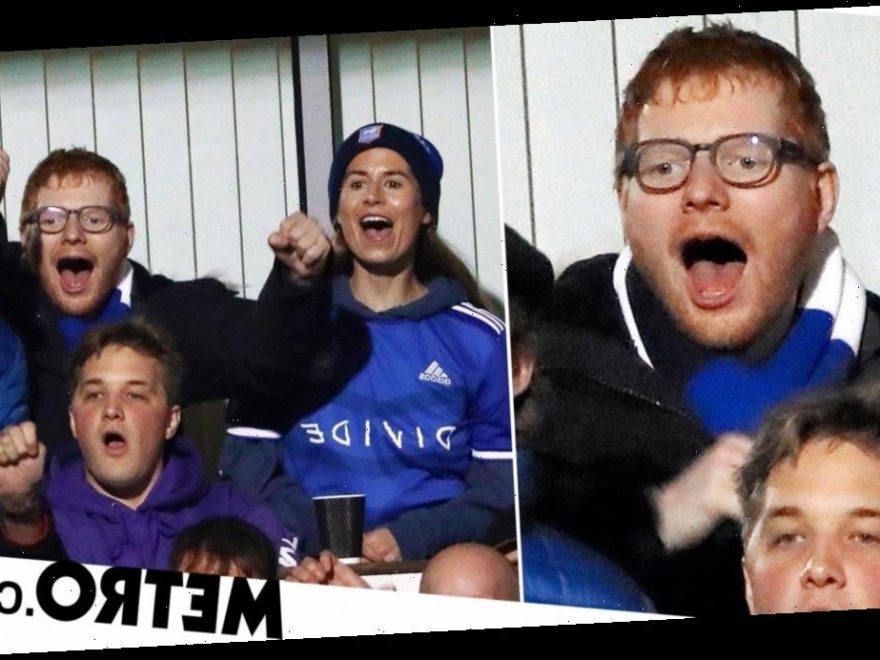 Ed Sheeran has taken his wife to the football – or maybe it is she who took him – as they cheered on their beloved Ipswich Town on a rare date night.

The pair, who keep their private life relatively on the DL, looked blissful as they donned the colours of their team on Tuesday night and headed to Portman Road Stadium.

Wrapped up against the bitter chill, the 28-year-old singer donned a black coat and bright blue scarf, as Cherry, 27, proudly wore a blue shirt of the team’s and matching hat.

Her shirt also sported the word ‘Divide’, making it clear she was also supporting her husband – one stone, two birds, and all that.

The recently-married pair were joined by mates as they sat high in the stands and watched the club play Wycombe Wanderers, which finished with a score of 0-0.

So, everyone goes home happy, right?

At various moments Ed’s crew leapt up out of their seats, and wildly gesticulated towards the game, clearly enthralled with the display on the field.

The pair recently held a second wedding, after reportedly first tying the knot last year, in a giant circus top in September.

Speaking during a YouTube interview with Charlamagne The God to promote his album No.6 Collaborations Project, Ed was asked about lyrics on the album which referred to the singer’s ‘wife’ in his song with Eminem and 50 Cent, Remember The Name.

The singer recently wrapped his worldwide tour, which featured a whopping 250 shows spanning over two years, and announced he would be taking a break from touring for the next 18 months.

Not long after, his manager Stuart Camp revealed he doesn’t think Ed will waste time in having kids, as he is not one for sitting still for long.

‘He won’t sit still for long. He’s not the holiday sort. But things may change – he could have a young family relatively soon,’ Stuart told Music Week.

Maybe he just wants some more spare time to check out football matches?

He’s certainly nesting, as it comes after Ed was given permission to build a boat-shaped prayer retreat, following some major back and forth with his neighbours over planning permission disputes.

According to the BBC, officials of East Suffolk Council said the new addition will ‘address an important need for a private place of retreat for contemplation and prayer, for celebration of key life and family milestones, family and social gatherings, marriages, christenings and so forth.

‘It would also allow the applicant’s family, friends and colleagues to be able to enjoy these things and join them in their observance.’