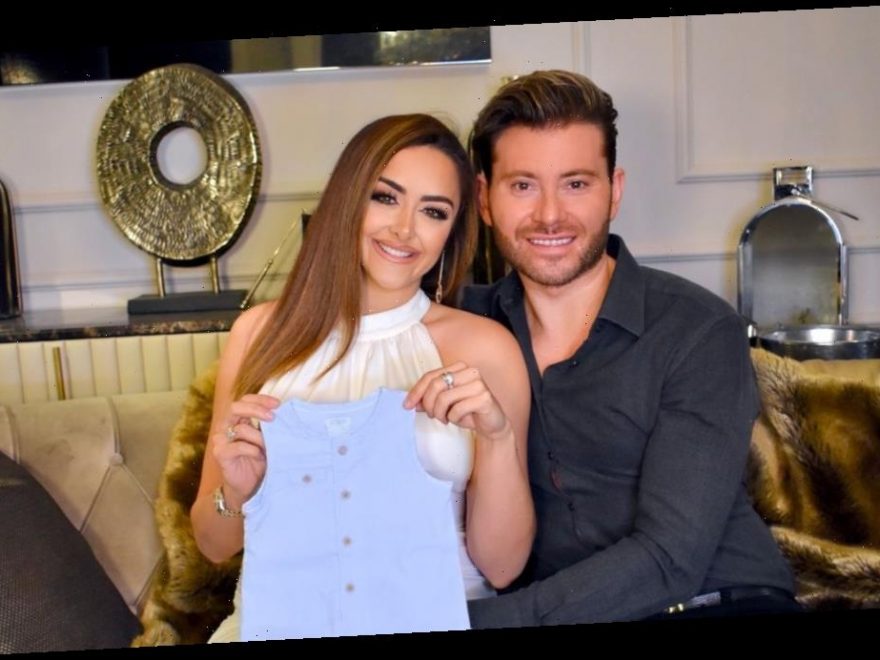 The star and her husband spoke exclusively to OK! ahead of scenes showing their gender reveal party being aired Monday night on the latest series of Real Housewives of Cheshire. Although they initially weren’t sure whether to find out the sex, the couple tells us they are delighted with the news they are expecting a son.

Hanna says, “I was jumping up and down, I was screaming ‘I knew it I knew it.’ Everyone was so happy. It was such a nice moment.”

Martin adds: “I was so happy with either boy or girl, but it’s exciting to know it’s a boy as it’s nice to know we’ll have similar interests and do lots of things together.”

Hanna adds: “He’s pleased to carry on the Kinsella name!”

The couple hosted a socially distanced gender reveal party six weeks ago with their mothers and the cast of the Real Housewives Of Cheshire. They explained that the sonographer wrote down the sex of the baby and the couple handed the note over to the production crew.

In October, their guests gathered at a safe distance at a manor house in Derbyshire and awaited a firework display that would unveil the gender of the baby.

Hanna, who is due in February, says, “It was a beautiful location, a big stately home and they’d lit it all up in blue and pink. We got a marquee and had cute blue and pink cupcakes.”

When the moment for the reveal came, rockets were set off while the little party watched to see which colour would be revealed.

And Hanna and Martin tell us they were over the moon when the sky was lit up with blue fireworks.

For weeks, the couple had been in two minds as to whether to find out the sex.

But ultimately, their decision came down to wanting to get the nursery ready.

Hanna explains: “At first we were in two minds, a lot of friends say it’s nice to have a surprise when it’s your first one. So for ages we were sort of undecided.”

But Martin explained that Hanna started to feel as though she wanted to know.

He says: “She basically wanted to do the nursery… although the nursery is actually neutral now! She sold the gender reveal based on wanting to decorate the nursery, but now it’s all neutral! I was quite happy to not find out, but ultimately if Hanna wanted to find out then I didn’t have strong feelings either way.”

And Hanna tells us she had an inkling that she was expecting a boy. She explains, “Pretty much straight away I had an innate feeling that it was going to be a boy. I kept talking about the baby as ‘him’ and I was saying to Martin I feel like I’ve bonded with a boy, so I just wanted to know.”

And when the couple decided to find out the sex, they thought it would be the perfect thing to share with family and friends.

Pregnant Hanna explains: “We thought it would be so nice to share with everyone. It was really special and our mums were there.

“It was really nice because in that moment none of us knew. Even me and Martin didn’t know, so we were so shocked.”

Still, the couple tell OK! Online that although they have a few ideas for a name, they’re keeping quiet.

Hanna explains, “The name is the one thing we’re keeping to ourselves, but we do have a few names we like. There’s one particular one we really like and it’s a bit traditional but it’s unique at the same time. It’s a good mix.”

Cosmetic Dentist Hanna, 32, revealed the news that she was pregnant in an exclusive interview with OK! back in August.

As well as her TV appearances, Hanna is a cosmetic dentist and runs her own practice, Kiln Lane Dental, while Martin is a cosmetic doctor and also has his own clinic, Re-Enhance in Cheshire.

Now, Hanna says she’s finding herself more tired as her pregnancy has ticked by.

She says: “As it’s progressed, I just get more tired nowadays. I’m always complaining about my back. I think it’s just because my body is changing shape so much and to accommodate for baby it’s a lot of pressure on your lower back.”

Still, plastic surgeon Martin tells us that his patients can’t help but complement his pregnant wife.

“Every single person I speak to, all my patients when they come in, say ‘Hanna looks amazing, she really suits pregnancy,’ I’m inundated with compliments for her.”

Hanna adds, “Everyone seems to be telling me that I’m glowing. I’m not sure I feel like I’m glowing!”

The star adds that her fellow Real Housewives stars have been giving them plenty of tips and advice, particularly as the couple doesn’t have too much experience of babies.

Hanna explains, “We don’t have any nieces or nephews, so they’re going to hand me this baby and I’ll be like, ‘What am I doing with it?’ We’ve been reading baby manuals.”

But the couple has no need to worry. Here at OK! we’re more than confident this lovely pair are going to be brilliant parents.