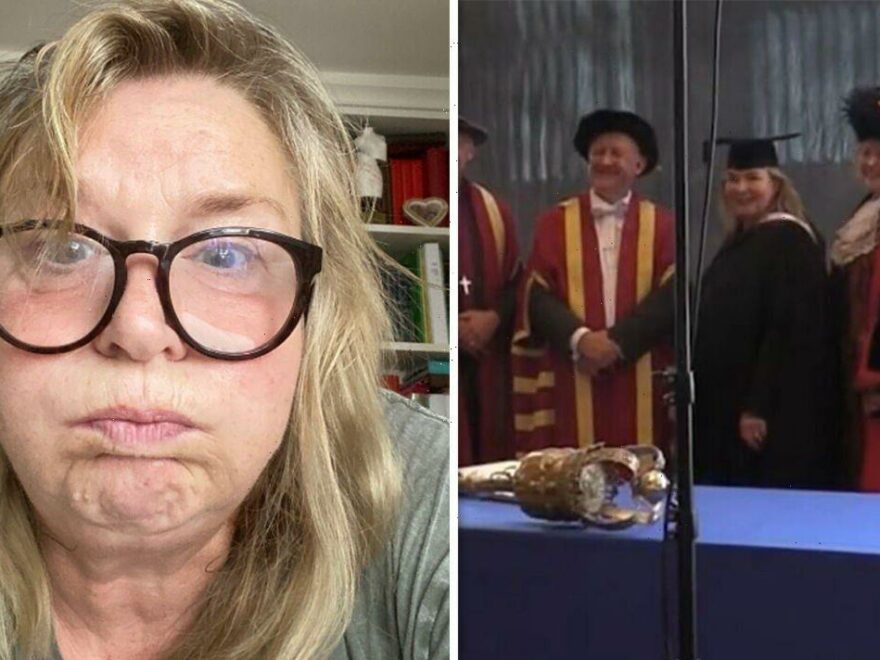 Fern Britton, 65, received an honorary Master of Arts degree from the St Mark and St Johns University for her services to broadcasting. Following the ceremony, she was asked to share some advice for the University’s current journalism students, and has since apologised for “pontificating” with her answer.

The official Twitter page for the Journalism and Media students at St Mark and St Johns University, also known as Marjon Univeristy, released a video clip following the ceremony.

Being interviewed by a student journalist, Fern advised the graduating journos: “Never be cowed by the person you’re going to interview. No matter how big they are, or perceptibly small they might be.

“Just be charming, be normal, be nice.”

The former This Morning host added that some interviewees might be nervous to talk to journalists, and sternly advised against ever saying: “Don’t be nervous”.

She also advised budding journalists do their research really well, telling them to “write a thousand questions, maybe”.

Once the hefty list of questions is complete, Fern noted they can then “distill it” to what actually needs to be asked.

She listed the priorities: “Who, what, where, why, when, and you’re done.”

While this all seemed to be sound advice, as some Twitter users noted in the comments, Fern was not as happy with her answer.

She tweeted earlier today: “What a great day yesterday was! I had the honour of being awarded a Master of Arts Honorary degree at Plymouths St Mark and St Johns (Marjon ) University.

“And then of pontificating re how to interview … embarrassed.”

She pleaded: “Forgive me.” with heart emojis.

Fans quickly flocked to the author’s Twitter page, reassuring her that she had nothing to be embarrassed about and providing endless amounts of congratulations.

One user commented: “I’ve always loved your attitude to interviewing and you have the great gift of putting people at ease.

“Always loved to see you getting the giggles on This Morning.”

Another emphasised that she is “always a class act” while one more fan shared some personal touches to their congratulations message.

They wrote: “You are so relatable. That’s an amazing quality to have.

“I honestly believe that no matter who you sat down with, whether it be a pensioner like me or it be an Hollywood actress, you’d behave exactly the same.”

Fern was obviously delighted with this last comment, replying to the fan with a kissing emoji.