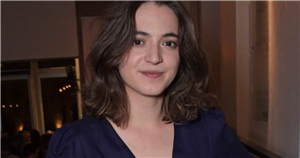 Soapland was left in disarray when the BBC announced its decision to axe Holby City last month, stating at the time that the show would come to an end in March of next year.

And rising television star Pearl, who starred in a 2013 episode of the show as the character Imogen Parker, slammed the "shameful" axing of the show.

Speaking to the Express.co.uk, the 26 year old stated: "I'm a real lover of soaps and I think that kind of television really helps to bring audiences together.

"They can explore things through those shows in a really interesting way because the audiences are so large. I think it is a real shame that any show like that is cut short."

Despite her disappointment over Holby City coming to an end, Pearl added: "I think to some extent the BBC is doing some amazing work at the moment, bringing amazing TV shows like Normal People.

"And, I May Destroy You, which I was in, I think they are doing some really interesting stuff," Pearl, who plays Nilufer in Michaela Coel's critically acclaimed 2020 series, added.

Last month, the BBC released a statement that read: "We are incredibly proud of Holby City, but it's with great sadness that we are announcing that after 23 years, the show will end on screen in March of next year."

The decision was met with outrage from dedicated viewers, who have since flooded social media and even set up an online petition.

The BBC has since responded with another statement, which read: "We sometimes have to make difficult decisions to make room for new opportunities and, as part of the BBC's commitment to make more programmes across the UK, we have taken the difficult decision to bring the show to a close in order to reshape the BBC's drama slate to better reflect, represent and serve all parts of the country.

"We would like to thank all the viewers for watching and we will be working with the programme team over the coming months to ensure that Holby goes out on a high."

Since the announcement, Holby City fans have noticed the opening and closing titles have been updated.

For all your showbiz updates, sign up for OK! 's daily newsletter here.