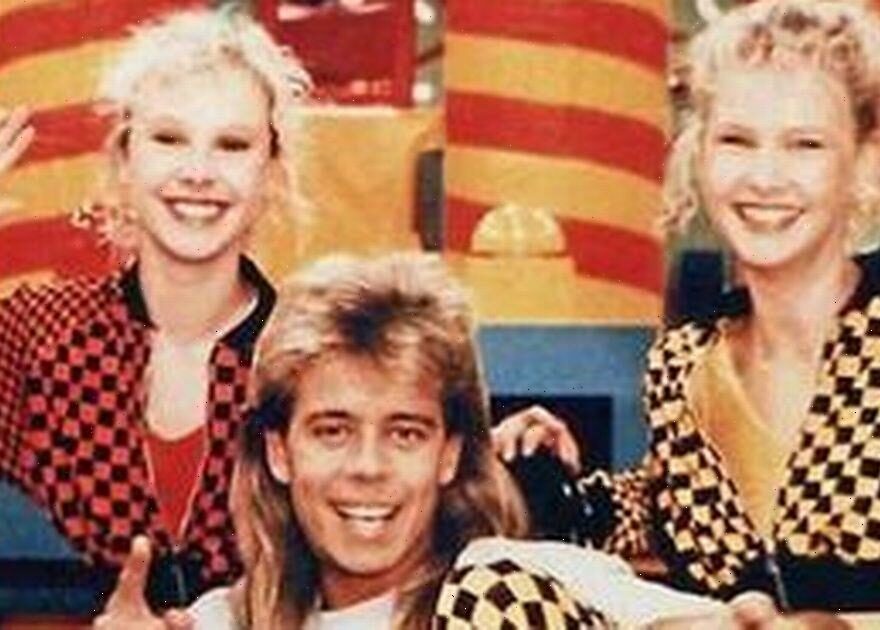 The twins from Fun House have been snapped looking sensational in a rare reunion picture more than 22 years after hit 90s show ended.

Cheerleaders on the ITV children's game show, Melanie and Martina Grant were seen beaming in a selfie with its host and former I'm a Celebrity contestant Pat Sharp.

Fun House, which ran for around 10 years until December 1999, features two teams representing schools across the UK competing in three rounds of games.

The bubbly blondes, who were 17 when they first appeared on the show in 1989, featured in all 11 series with Melanie supporting the red team and and Martina cheering on the yellow team.

Now, presenter Pat, 60, has sent Fun House fans on a nostalgia trip after posing for a photo of the twins, now 50, more than two decades on.

Pat, who back then rocked a mullet, took to Twitter to share the snap, captioned: ""FunHouse twins alert!"

He is seen in the foreground as the twins, wearing black dresses, strike matching poses with their arms in the air.

His post of the photo on Instagram said they had reunited at the Let's Rock 80s retro festival in Kent.

It was captioned "Your actual FunHouse twins", adding they were "Melanie & Martina having their best day."

The pic unsurprisingly promoted calls for the show to return, as one person wrote: "Need to bring back the #Funhouse for Saturday Nights Tv!"

Another tweeted: "Can you bring it back for adults that never grew up? Would be a childhood dream come true to be on this show."

A third commented: "By far my favourite show as a kid, gutted I never got on it and now I’m way too old if it did make a comeback."

Others reminisced about watching Fun House as children.

A Twitter user wrote: "My childhood right here..now this is a show they should bring back,children's afterschool and Saturday morning tv is just not the same anymore for my kids."

One tweeted: "Many happy memories of the peak of CITV, Friday's after school were always either Fun House or Knightmare before switching over to Grange Hill on BBC1. Amazing times Pat."

Another wrote: "Bet it was a whole lotta fun, Was there prizes to be won? Real crazy show, Where anything goes, Thanks for staying AWESOME!"

The trio previously appeared on This Morning back in 2020 when the sisters surprised Pat with a video message as he promoted his book Re-Run the Fun: My Life as Pat Sharp.