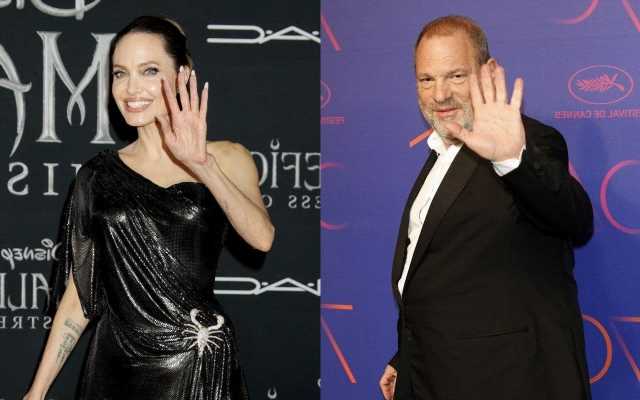 The disgraced Hollywood producer vehemently denies any wrongdoing, labeling the assault accusations made by the ‘Maleficent’ actress as a PR stunt to promote her book.

AceShowbiz –Angelina Jolie has claimed she and Brad Pitt “fought” when he worked with Harvey Weinstein after she had told her ex about an assault attempt by the now jailed producer.

Jolie told The Guardian on Saturday (04Sep21) she had a “bad experience” with Weinstein – who was sentenced to 23 years behind bars in New York, for rape, among other sexual offences, last year (Mar20), after being accused of sexual misconduct by dozens of women – when he was an executive producer on her 1998 movie “Playing by Heart“.

Asked about the “first time she felt sufficiently disrespected in the industry to tell somebody to f**k off,” Jolie answered, “Well, no surprise, Harvey Weinstein. I worked with him when I was young.”

The “Maleficent” star – who shares six children with Brad – described her encounter with Harvey as “beyond a pass” that she “had to escape.”

“If you get yourself out of the room, you think he attempted but didn’t (assault you), right? The truth is that the attempt and the experience of the attempt is an assault.”

Angelina refused to work with or be associated with Weinstein again, but told the outlet she was upset when Brad starred in Quentin Tarantino‘s 2009 film “Inglourious Basterds” and 2012’s “Killing Them Softly“, both of which were distributed by The Weinstein Company.

“We fought about it. Of course it hurt,” she said of Brad, who has previously stated he warned Weinstein to stay away from his then-fiancee Gwyneth Paltrow, when she too shared details of inappropriate conduct by the Oscar winner.

“I stayed away and warned people about him (Weinstein),” she revealed. “I remember telling Jonny, my first husband, who was great about it, to spread the word to other guys – don’t let girls go alone with him.”

“I was asked to do The Aviator, but I said no because he was involved. I never associated or worked with him again. It was hard for me when Brad did.”

Jolie and Pitt, who divorced in 2019, are currently battling in court over custody of their children.

Weinstein, through his assistant, released a statement to TMZ on Saturday, denying Jolie’s claim and accusing her of trying to create “clickbait” to promote her new children’s book.

“It’s very clear to me that this is for more sales on Angie’s BOOK. THERE WAS NEVER an assault, and NEVER an attempt to assault.” he raged. “It is brazenly untrue and clickbait publicity. You’re Angelina Jolie, every male and female in the world, I’m sure, shows interest in you. Is the whole world assaulting you?”

Sources close to Pitt also responded via the outlet, insisting he never “teamed up” with Harvey for “Inglorious Basterds” but signed on for the job with writer/director Tarantino, whose film was subsequently distributed by Weinstein’s company.

Weinstein is now in custody in Los Angeles, where he will stand trial for 11 counts of rape, sexual battery, and other counts relating to claims made by five women from incidents which reportedly occurred in California over a decade ago. He has pleaded not guilty to the charges but a trial date has not yet been set.