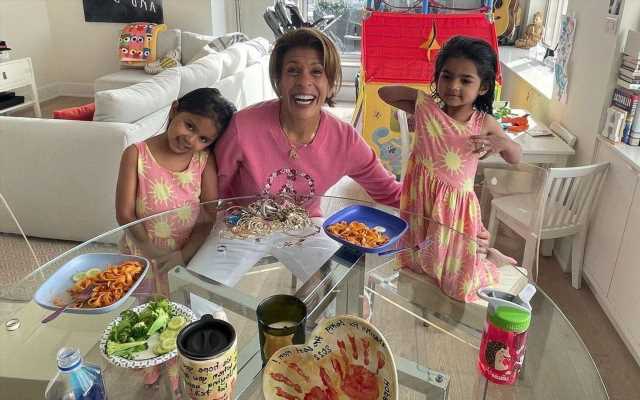 The ‘Today’ host talks about raising her adoptive children with former fiance Joel Schiffman and reveals she wants them to be ‘brave’ without being ‘too bossy.’

AceShowbiz –Hoda Kotb and her ex-boyfriend are co-parenting really well. The 58-year-old star – who was married to Burzis Kanga from 2005 until 2008 but has adoptive daughters Haley, five, and Catherine three with former fiance Joel Schiffman – claims that the former couple “speak a lot” to ensure their time with the kids over the Christmas period is divided up fairly.

“We have a really great working relationship when it comes to holidays. We speak a lot and we make sure that we divvy it up so that it is great for him and great for us. The ultimate goal is when your girls are happy. That’s what we both say, ‘Happy girls, that’s all we want!” she said.

The “Today” host went on to add that she and her former partner had a “nice mix” and noted that her co-star Savannah Guthrie, 50, – who is mother to Vale, eight, and Charles, five, with husband Michael Feldman – wanted to teach their children to be “brave.”

“Savannah and I both came to motherhood late in life, but I think one thing I really wanna work on with my girls, too, is them having their voice. [Teaching them about] being brave enough to say what they need, what they want and not to feel greedy or too much or too bossy.”

“I feel like a lot of us, when we were younger, we were taught to be quieted. I was called shy, but as I reflect on [it], I was probably quieted like, you know, ‘Quiet down, be a good girl.’ But, I think I want my girls to be more vocal and to say what they want and not to be afraid and not to try to conform to be what other people want.”