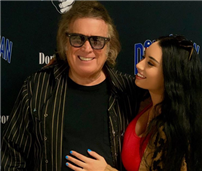 Don McLean has hit out at claims his partner is a “gold digger” and denied he is “squandering my fortune”.

McLean, the 73-year-old singer-songwriter behind hits such as American Pie and Vincent, has been dating 25-year-old model Paris Dylan since last year.

Dylan, who has referred to McLean as “the love of my life”, documents their life together on social media and accompanies her partner on tour around the world.

McLean, who has been married twice, said the couple have been the victims of gossip and untrue claims about their relationship.

He told the PA news agency: “I get gossiped about, me and my girlfriend. There have been these ridiculous stories lately about the two of us and how she’s a gold digger and I’m all this stuff.

“She’s the least likely out of any girl you’d ever want to meet. She’s very helpful to me. What people don’t realise is, yes we’ve been in 85 cities in the last year but in every one of those cities I’ve done a concert and made money.

“I’m not squandering my fortune on my girlfriend. If anything she’s helping me do these things. But this is the kind of stuff that’s out there, even for me, I get this.”

McLean, who has sold millions of records over the course of his career, said he is “really happy” and that Dylan is a “fantastic person”.

McLean’s most famous song, 1971’s American Pie, was inspired by the deaths of rock and roll pioneer Buddy Holly and is widely interpreted as a lament for a generation losing its innocence.

The rock star said he sees “very few similarities” between then and now.

He said that “in those days we were in the streets protesting and angry about war”, whereas now “no-one says a word”.

New York-born McLean is set to appear on a music programme called Mixtape, where he will discuss his love of Holly.

Holly was one of the biggest rock and roll stars in the world when he was killed in a 1959 plane crash alongside his peers The Big Bopper, and Ritchie Valens.

The incident is often referred to as “the day the music died”, a lyric from McLean’s American Pie.

“Buddy Holly was someone whose music I fell in love with when I was probably 12 years old and I was always able to buy a record of his here or there”, McLean said.

“In those days we had no money and we didn’t have big record collections. If I had five albums, three were Buddy Holly, one was The Everly Brothers maybe and there was a folk album of some sort.

“Then his death really affected me emotionally and it was very powerful and stayed with me for many years.”

McLean is still a prolific performer and estimates he does between 80 and 100 concerts around the world each year.

2021 will mark the 50th anniversary of American Pie, a revered track that was selected for preservation in the US National Recording Registry by the Library of Congress for being “culturally, historically, or artistically significant”.

McLean said he has no plans to hang up his microphone. “No, I don’t think I could retire”, he added.

McLean’s episode of AXS’s Mixtape will air in the US on October 3.