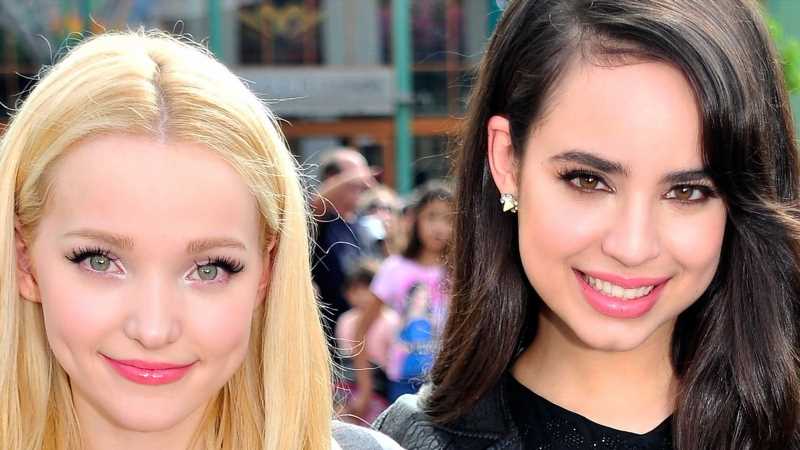 When you’re filming for months at a time for a franchise that’s been going for nearly half a decade, it’s inevitable that the cast will become friends as well as colleagues. That’s certainly been the case for the actors of Disney’s “Descendants,” who have formed lasting friendships on and off-screen.

“The whole cast has become like a family,” Sofia Carson told Access. “When you share so much time together and just a beautiful experience you guys are just kind of bonded.” One connection that seems to have lasted throughout the franchise’s run is between Carson and Dove Cameron, who for the past four years have portrayed Mal and Evie, the daughters of Disney villains Maleficent and the Evil Queen.

Cameron and Carson have understandably struck up a close bond over the course of filming, and while there’s no word on whether the “Descendants” will be returning for a fourth movie or television series, it’s clear that the duo have formed an everlasting friendship, much like their characters. So just how close have the pair become since starring together in the Disney franchise?

Sofia and Dove have become total BFFs starring on the Descendants

Whether appearing together at press junkets or sharing behind the scenes secrets on Instagram, Sofia Carson and Dove Cameron have most certainly become BFFs since starring in the “Descendants”.

The duo showcased their friendship to the max during promo for “Descendants 2” playing the “Best Best Friend game,” (via YouTube), where Cameron revealed that not only does she know Carson’s fave snack (it’s wasabi peanuts), but that she special ordered them for her as the actress always struggles to find them.

Carson has been especially vocal about their friendship on Instagram, posting dozens of pics of them both as Mal and Evie on set. In one particular post wishing Cameron a happy birthday, the actress referred to her as “the Mal to my Evie, the Purple to my Blue. In another, she shared a screenshot of the “core four” comprising of herself, Cameron, Booboo Stewart and Cameron Boyce writing “forever and always.”