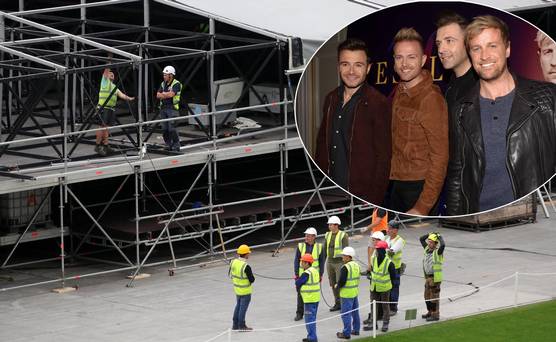 Westlife will be putting on the “glitziest” show in their entire Twenty Tour when the Irish stars come to Croke Park this weekend.

Organisers say that the four char-toppers are pulling out all the stops to ensure it’s an affair to remember when they perform two sold-out dates for 150,000 ticket holders in the northside stadium.

The only outdoor shows in their whole tour, their Irish dates will be catered specifically to the sprawling stage of Croker with up to 50 trucks coming over here to set up the “massive production.”

“It’s all the hits and it’s a bigger, glitzier show than you’re getting in the UK,” event controller Eamon Fox told independent.ie. “They’ve an extra stage added that goes right down into the fans as they want to get as close to the fans as they can. More so, I watched their other show so it’s got all of that plus an extra, large-scale video screen with pyrotechnics and special effects.

“It’s specifically tailored to the Dublin date. It’s not a touring production per-se, it’s a one-off show for the fans in Dublin.

“It’s one of the biggest stages that we’ve ever put in, width-wise, given that there’s only four lads on it. It’s a very big stage.”

The first time they’ve played Croker since they parted ways back in June 2012, they have been garnering rave reviews for their European tour, which will go to Asia at the end of this month.

They will play all the hits in their impressive career, which includes 14 number ones and 45 million in album sales, and have splashed out on their production in a bid to dazzle fans.

Doors to Croke Park will open at 5pm with support act James Arthur performing from 7pm on Friday night and 6.50pm on Saturday night.

Ticket holders are being urged to arrive early and use public transport. They are also being reminded to bring no back-packs bigger than A4 size with the usual security checks in place.