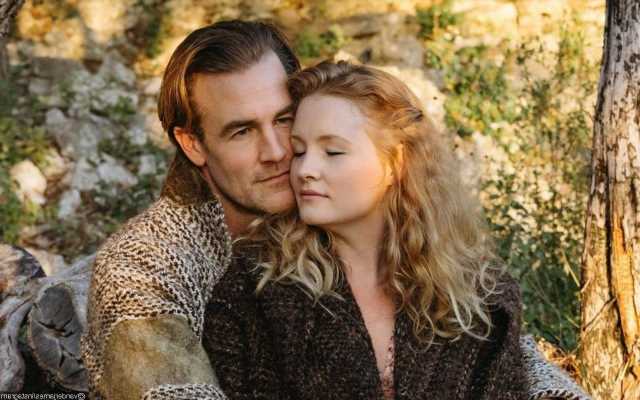 Letting out the news via Instagram on Monday, November 22, the Matt Bromley on the FX drama “Pose” shared a video of one of her elder children introducing the infant. In the adorable clip, the girl said she called her newborn brother “dinosaur.”

The 44-year-old star also posted pictures of him, his wife and their older children with the little bundle of joy. “Humbled and overjoyed to announce the safe, happy arrival of Jeremiah Van Der Beek (We’ve been calling him Remi, btw – not ‘dinosaur’),” he cheekily wrote in the caption.

James said they decided to keep the pregnancy a secret “after experiencing late-term #pregnancyloss twice in a row (both at 17+ weeks).” He admitted, “Truthfully, I was terrified when I found out.”

He detailed their journey to become parents again, “But we found a doctor here in Texas who diagnosed the last two as having been caused by an: ‘incompetent cervix’ (I asked him what kind of misogynistic old dude invented that term and he laughed – which made me like him even more. Now it’s called a #WeakenedCervix). A simple surgical cerclage was done, removed at full-term.”

The “Dawson’s Creek” alum revealed that his wife “gave birth naturally on the ranch.” He went on sharing, “The medical books say to only look at a cerclage as an option after three late-term losses. Our doctor recommends considering it after one. Spread the word.”

Reflecting on the blessings and their losses, James wrote, “Each child brings their own energy, their own manifestation of consciousness, their own lessons. The ones we lost each gifted us with different pieces of the puzzle… leaving us that much more grateful for the ongoing master class we get to enjoy with this sweet, wise little one.”

He also expressed his wish for privacy as he sent a message to his neighbors, “(ps – To everyone in our community – both local and extended – who knew about our journey and honored our desire for privacy… thank you. May that respect and karma come back to y’all 1000-fold).” Concluding his lengthy caption, he wrote, “Life is beautiful.”

Kimberly revealed on “The Make Down” podcast in October 2020 that she has had five miscarriages. After losing two pregnancies in a row in November 2019 and June 2020, she admitted that “those were incredibly difficult, emotionally and physically” that “I just felt like I was going to pass.”