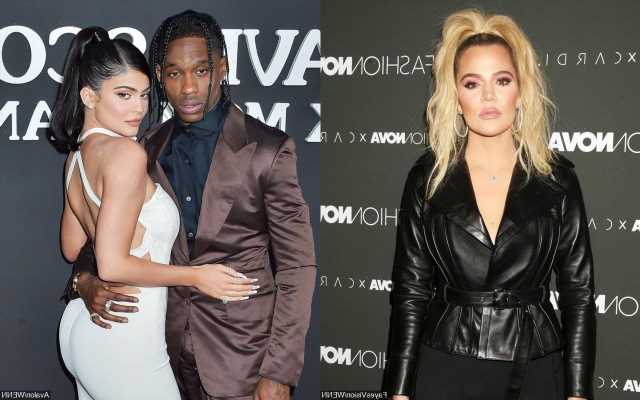 After her younger sister and her baby daddy’s cover story with the magazine, which claims that they aren’t together, is leaked online, the Good American founder shuts down the false report.

AceShowbiz –Khloe Kardashian has put rumors about Kylie Jenner and Travis Scott (II)‘s split to rest. The Good American founder confirmed that her younger sister and the “SICKO MODE” rapper are a couple despite W Magazine’s claims.

“Wow i don’t know why this magazine would write this but they are very much a couple,” Khloe wrote via Instagram. Her response came after the article leaked on Sunday, December 5 and stated that they’re “not actually a couple.”

Many social media users also reacted to Khloe’s comment. One wrote, “She worried about the wrong things .. girl about to be a whole step mom and she worried about her sisters problems.” Another threw a shade at her as saying, “Like her and Trick Thompson?”

As for the leaked piece, the author of the article wrote that Kylie and Travis, who are expecting their second child together, aren’t actually together. “Travis and Kylie seemed very comfortable under the sheets, but even though they will soon have two children together — their daughter, Stormi, is 3 — they are not a couple, and haven’t been in two years. They’re the modern family!” the author reportedly stated.

Previously, it’s reported that the issue was supposed to be scrapped amid intense media scrutiny following the fatal tragedy that took place at Travis’ Astroworld Festival last month. “W editors have cleared any planned coverage of Travis and Kylie from their website, but the magazine was already printed, and now they are trying to stop the delivery trucks,” a source revealed to Page Six. “In the light of what happened at Astroworld, the interview and cover lines seem inappropriate, to say the least.”

Unfortunately, the cover leaked on the internet. A pregnant Kylie and her baby daddy cuddled in a series of bedroom photos. In a more family-friendly picture, the “Keeping Up with the Kardashians” alum posed with Travis and their daughter, 3-year-old Stormi. The mother and daughter were also seen twinning in yellow dresses.

Although Kylie and Travis looked loved-up in the photos, the magazine insisted they’re “not actually a couple.” Even in the cover story, it’s said that the makeup mogul and the rap star haven’t been in a relationship for the past two years.