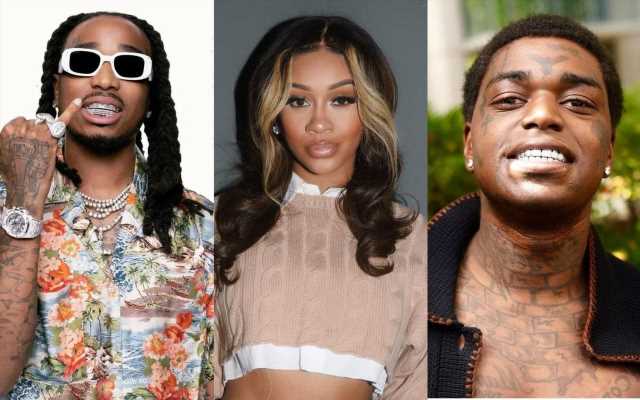 The ‘Super Gremlin’ emcee reveals during an Instagram Live how he dramatically reacted when the ‘ICY GRL’ raptress opted to date the Migos rapper instead of him.

AceShowbiz –Kodak Black opened up to one of his heartbreaks. The “ZEZE” rapper, who has been shooting his shots at multiple women online, revealed that he was left in tears after Saweetie picked Quavo over him to be her boyfriend.

Kodak went on to say that he was heartbroken, he saluted their relationship since they were going steady for a moment.

Fans quickly trolled Kodak upon watching the Live. “Do she know you were an option sir?” one follower asked. “He was never in the game tho,” another person wrote in an Instagram comment.

“He be down bad wanting everybody that don’t want ish to do with him!” another fan added. “Well do you blame her? Look at yourself beloved. Please do not @ me about my statement or I’ll be forced to engage in combat,” one other said.

Kodak, meanwhile, is known for flirting online with a couple of female stars. Back in November, the 25-year-old emcee said that he’s working on six-pack abs to win the Zendaya Coleman‘s heart on his new song “Kodak the Boss”.

He was met with clownery after the release of the track.”KODAK ain’t giving up [laughing with tears emoji],” one person tweeted. Another added, “So You REALLY Thinking She Leaving Spider Man For You Cuh?! NOT Happening,” referring to Zendaya’s current boyfriend Tom Holland, who plays Spider-Man in Marvel Cinematic Universe.