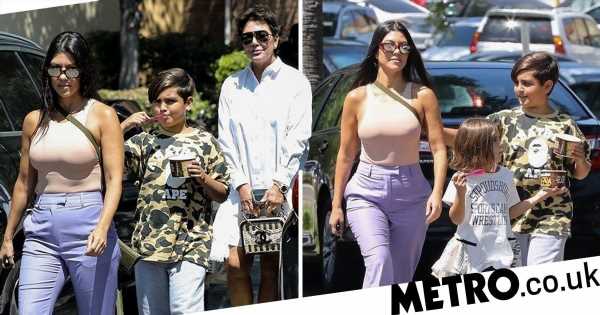 Kourtney Kardashian took the kids out for a family day after arriving back from her holidays to a firestorm about vaginas.

The reality and social media star, who has her own lifestyle website Poosh, has been slammed for her recent push of a non-toxic feminine wash line.

The ad for this feminine wash sent people into a tailspin shortly after it was released.

Kourtney’s site wrote in a now-deleted tweet: ‘Keep your yoni healthy with these non-toxic feminine washes that won’t harm your hoo-ha.’

Firstly, we know that Kourtney is not averse to using the word vagina – she also birthed two of her kids, pulling them out herself even, so the eldest of the Kardashian sisters isn’t shy about it at all.

However, we’re not quite sure why she decided to use the word ‘hoo-ha’, because we’re not in pre-school.

Kourtney’s website, Poosh, named after her daughter Penelope, was billboarded as ‘the modern guide to living your best life’. We tried to ignore the ‘living your best life’ reference because that has died with 2018 however, so should the word hoo-ha because there’s a lot of hoo-ha itself about creating a taboo around vaginas.

While others were keen to point out that vaginas were in fact self-cleaning and therefore probably shouldn’t need additional cleansing for risk of ruining the natural balance of things.

Kourtney ignored all the drama as she headed out for a snack with her momager Kris Jenner and her children, Mason, Reign and Penelope as they had lunch at King’s Fish House before munching on some frozen yoghurt from The Commons while trekking around Calabasas.