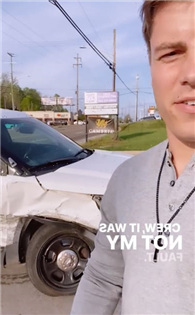 At the height of their popularity, the Duggars were one of the most famous families on reality TV.

Not surprisingly, other networks attempted to cash in on America’s apparent interest in large, fundamentalist families by producing shows that were strikingly similar to Counting On.

One such knock-off project was Bringing Up Bates, a series that focused on the Tennessee-based Bates clan.

The Bateses are slightly less conservative — and a whole lot less controversial — than the Duggars, but they made some shocking headlines of their own this week.

The family was almost involved in a tragedy over the weekend, when 29-year-old Lawson Bates was involved in a near-fatal car crash.

While there were no major injuries, Lawson revealed in a statement that the crash would have had fatal repercussions had the timing been only slightly different.

“At 5:30 PM on Thursday, April 21, I was in Knoxville,TN driving to pick up my fiancé, Tiffany, from her wedding hair and makeup trial. Out of the blue a car turning left onto the main highway slammed into my passenger side,” Bates says in the statement.

“I am so grateful I had not picked her up yet, as that would’ve been her seat. Life can change so fast, and I was quickly reminded of that,” he continued.

“Although the car is completely totaled, I feeling very grateful to be ok, and relieved the other driver was alright as well. Definitely grateful for God’s protection today!”

“Crew, it was not my fault. I need a ride. Can’t win them all,” Lawson explained in an Instagram video taken just moments after the crash.

“Life is fast, and it can change in a snap! Blessed it’s just a totaled car #NoInjuries,” he captioned the video.

Lawson got engaged to Tiffany Espensen back in the spring of 2021.

He popped the question while he and Tiffany — who is also his musical collaborator — were vacationing in Italy.

“I knew something was suspicious when Lawson became awfully secretive with texts and planning with others. However, he still blew me away with this surprise!” Espensen said at the time.

“To travel to Italy for any occasion is a dream, but especially for an engagement.”

News of the engagement came just weeks before UpTV announced that Bringing Up Bates would not be returning for an eleventh season.

“We will not be premiering Bringing Up Bates season 11 on UPtv as planned as we will be focusing our programming in 2022 on movies and a new scripted series to be announced soon,” UPtv’s statement read.

“When we premiered Bringing Up Bates, the series was focused on parents with 19 kids who were teenagers and young children. The cameras were there to capture the love, laughs, and big life moments, as the family continued to grow,” the network stated.

“Thank you to Gil and Kelly Jo Bates for welcoming viewers into your family’s home over the past ten seasons.”

News of the cancelation came after the show was renewed by the network, and just weeks before its eleventh season was set to premiere.

Fans suspected that the decision was linked to Josh Duggar’s conviction on child pornography charges, as the Bateses were close friend with the Duggars.

Whatever the case, Lawson and family seemed to take the news in stride.

And these days, we’re sure he’s overwhelmed with gratitude at having walked away from his totaled vehicle.