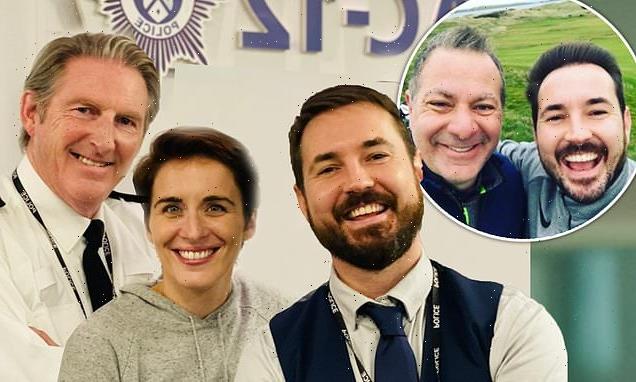 Line Of Duty stars Vicky McClure and Martin Compston have shared moving tributes to the show’s die-hard fans as they count down the hours until the long-awaited series six finale.

The actress, who has played DI Kate Fleming since the show’s inception in 2012, continued to fuel fans’ concerns that the series could be coming to an end in a lengthy Twitter post, which ended with the phrase: ‘Let’s wrap this up!’

Meanwhile Martin, known to many as DI Steve Arnott, described working on the series as ‘the job of a lifetime’ and vowed that fans will finally get answers after months of theorising over the identity of the elusive ‘H.’ 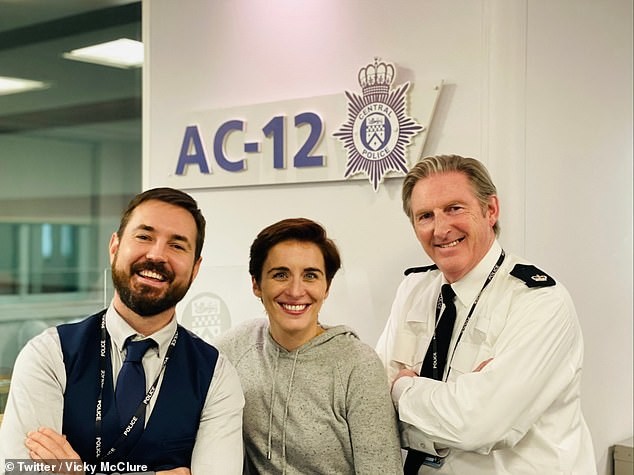 End of an era: Line Of Duty stars Vicky McClure and Martin Compston have shared moving tributes to the show’s fans as they count down the hours until series six’s finale

Vicky shared an image alongside Martin and their co-star Adrian Dunbar, who plays Superintendant Hastings on the show, and a snap of their knitted counterparts.

She wrote: ‘Happy Line Of Duty day! Please excuse the slightly over emotional post but it’s been quite a surreal time!

‘The audience support has been unreal, the creativity of merchandise, the artwork, ground-breaking viewing figures and the hype!!

‘It’s not lose on me how lucky I am to be a part of Line Of Duty, not just because of the success of the show, but the lifelong friendships we’ve all gained. 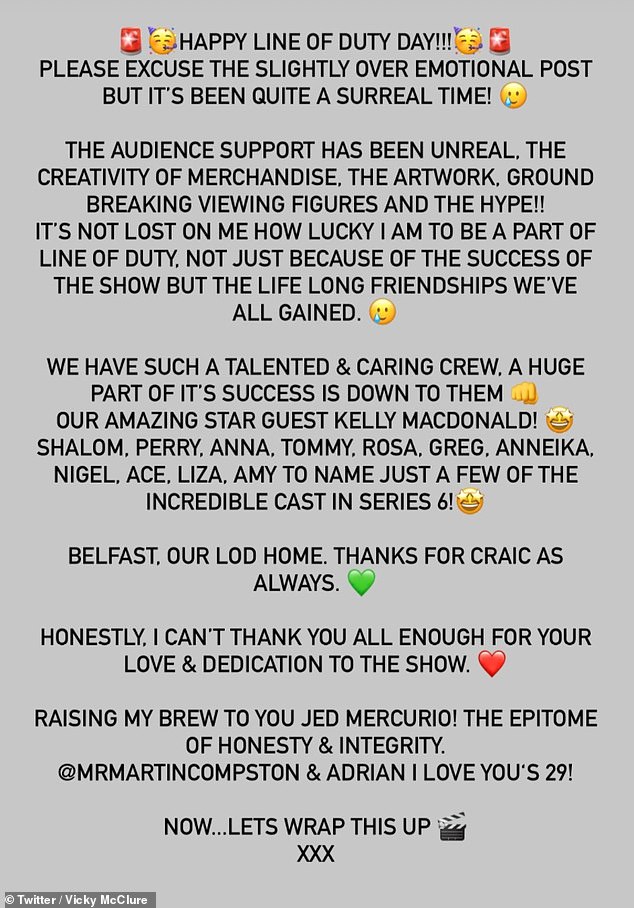 Emotional: The actress, who plays DI Kate Fleming, continued to fuel fans’ concerns that the series could be coming to an end in a lengthy Twitter post 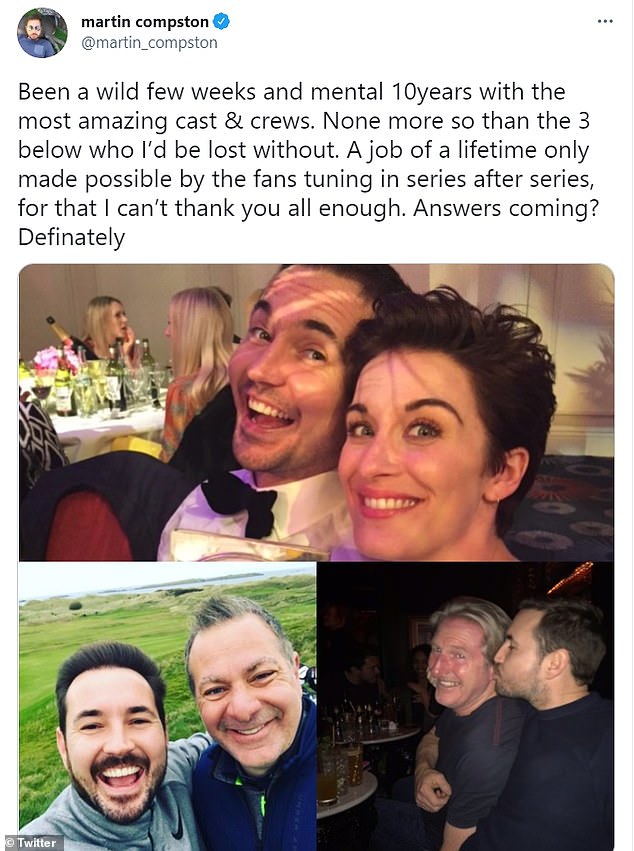 Goodbye? Meanwhile Martin, known to many as DI Steve Arnott, described working on the series as ‘the job of a lifetime’ and vowed that fans will finally get answers

‘We have such a talented and caring crew, a huge part of its success is down to them. Our amazing guest star Kelly MacDonald! Shalom, Perry, Anna, Tommy, Rose, Greg, Anneika, Nigel, Ace, Liza, Amy to name just a few of the incredible cast in series six!

‘Belfast, our LOD home. Thanks for Craic as always. Honestly, I can’t thank you all enough for your love & dedication to the show.

‘Raising my brew to you Jed Mercurio! The epitome of honesty & integrity. @MrMartinCompston & Adrian I love you’s 29! Now… let’s wrap this up.’ 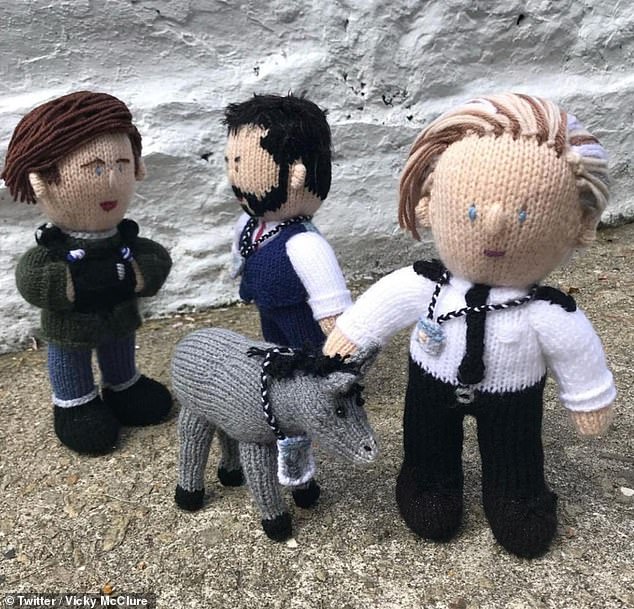 Fan tribute: Vicky also shared a snap of the knitted counterparts for her character, DI Arnott and Superintendent Hastings

Meanwhile Martin shared a trio of images alongside Vicky, Adrian and the show’s creator Jed Mercurio, as he thanked fans for their support of the show.

He tweeted: Been a wild few weeks and mental 10 years with the most amazing cast & crews.

‘None more so than the 3 below who I’d be lost without. A job of a lifetime only made possible by the fans tuning in series after series, for that I can’t thank you all enough. Answers coming? Definately.’ 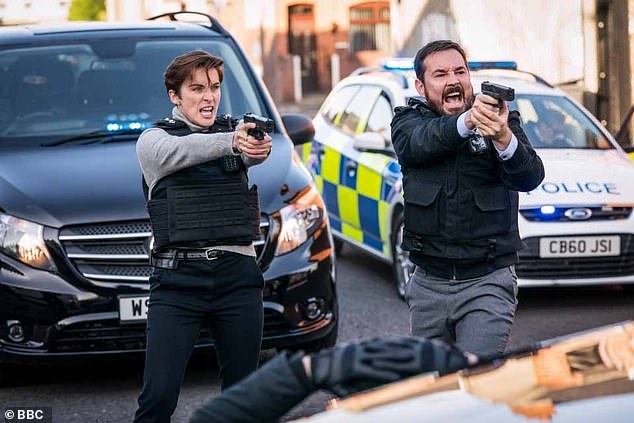 It’s nearly time! It’s expected that 15 million viewers will tune in for the final episode, with much of the plot centering around the identity of the mysterious ‘H’

It’s expected that 15 million viewers will tune in for the final episode, with much of the plot centering around the identity of the mysterious ‘H’, with anti-corruption unit AC-12 having a big job on their hands in trying to catch the villain.

Leading man Martin – who previously revealed that executive decisions about the series are ‘above his pay grade’ – recently cast doubt on the show’s future during an appearance on The Jonathan Ross Show.

Speaking on Saturday’s show, he said: ‘We won’t come back just for the sake of it. That’s for sure. We’ll come back if there’s a story to tell.

‘If it ends well maybe sometimes it is best to leave it. But genuinely we don’t know.’

Line Of Duty creator Jed Mercurio excited fans when he shared the first clue about the plot of season six to Twitter.

Uploading a snap of a packet of the Australian chocolate biscuits TimTams with the caption ‘#LineofDuty Series 6 Plot Clue No. 1’, fans began to ferociously speculate as to what it might mean.

But one plot point hanging over the next season of the show is about the identity of the ominous ‘H’.

While the mystery was somewhat answered in the season five finale, it was also revealed that there are FOUR people pertaining to be ‘H’, with the final one still unknown.

So who could it be?

She was one of season five’s stand-out characters, swooping in towards the end of the series to interrogate Ted Hastings – highly suspected to be ‘H’ at the time.

And while she simply seemed to be excellent at her job – and hellbent on uncovering the corruption within the department – could it be that Patricia Carmichael was SO keen to pin the blame on Ted to take the focus away from herself.

Could SHE be the fourth ‘H’?

Her position of power and respect, along with her unnaturally steely and cut-throat demeanor, could well point to this.

Ted Hastings was pinpointed by viewers of the show, as well as the characters on the show, to be a candidate for ‘H’.

But it seemed he was exonerated by the end of season five, allowed to walk free.

But could be potentially be triple-crossing us all? Could he in fact STILL be the potential fourth ‘H’.

The biggest issue with this theory is that Gill Biggeloe – one of the three revealed to be ‘H’ – was so against him. Surely she wouldn’t be working to deter him if they were in league?

UNLESS, she doesn’t KNOW he is the fourth ‘H’?

Detective Chief Constable Andrea Wise was new to the show in season five and is another high-powered contender for ‘H’.

She has been constantly interfering when it has come to supporting AC-12’s investigations, removing them from the investigation into Operation Pear Tree. She also instigated the Ted Hastings investigation.

She is also keen to cover up police corruption, despite announcing at the end of season five: ‘This constabulary will work tirelessly to root out rotten apples in its ranks.’

Police and Crime Commissioner Rohan Sindwhani demanded to be ‘in on’ a meeting between Andrea Wise and Ted Hastings. This might be a small clue but any clue could be valid at this point.

Any shady behavior suggests ‘H’ is at play, and so Rohan could indeed be culpable.