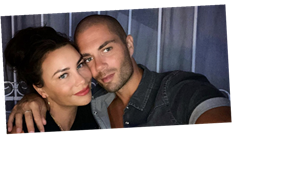 Countless couples have been torn apart by the dreaded Strictly curse, but one pair who believe they won’t suffer the same fate as so many before them are contestant Max George and his girlfriend Stacey Giggs.

And while there’s no doubt everyone will be speculating about which Strictly Come Dancing pairings have the most, ahem, “chemistry” on the dancefloor, a source close to ex-WAG Stacey has told new! magazine she has no concerns about former The Wanted star Max developing a wandering eye.

“They’re very solid,” revealed our insider. “He’s totally smitten with her. Everyone goes on about the Strictly curse, but she’s not worried at all. They trust each other totally. They’ve got a very good, strong relationship and she’s very supportive of him.”

In fact, our source says it was Stacey, 41, who encouraged him to take part. “It was her idea. She told him, ‘This could be great for you’,” continued our mole.

“She’s so supportive of Max. Behind every successful man there’s a strong woman and Stacey is that. She wanted him to do this.”

Stacey has been dating toyboy Max, 32, for 18 months – her first relationship since her 2017 divorce from footballer Ryan Giggs, who had an eight-year affair with his sister-in-law, Natasha, during their marriage.

Max, who was previously engaged to Michelle Keegan, fell for Stacey after splitting up with his beauty queen girlfriend Carrie Baker, who he dated for four years.

Now he sees his future with Stacey and it’s clear the pair are already serious. “I can really see myself ending up with Stace,” he said.

“I always wanted to get married, and I love kids.”

The couple recently enjoyed a holiday in Spain with Stacey’s children Liberty, 17, and Zach, 13.

Our source believes that Strictly will be a boost not just for Max but Stacey too, after she hit the headlines for all the wrong reasons while married to Ryan.

“You’re going to see a lot more of her and, in a way, it’s her time to shine as well,” added our mole.

“Stacey is so confident and she was always in the shadows with Ryan. She’s going to enjoy being in the spotlight. She’ll be out there – but for the best reasons.”

We hope Max does you proud, Stace!