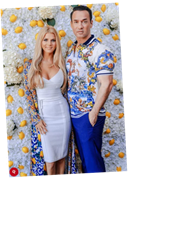 Few reality stars can boast of a life story more inspirational than that of Mike Sorrentino.

We’re sure you know the epic saga by now:

Sorrentino was convicted on tax evasion charges, and he eventually wound up serving 8 months in prison.

Before he did his bid, however, the Jersey Shore star made some very important changes in his life.

Mike got sober after years of life-threatening substance abuse, and he re-connected with his college sweetheart, Lauren Pesce.

Sorrentino and Pesce got married in November of 2018, just months before he began serving his sentence.

Now that he’s been released, Mike should be enjoying his long-delayed happily ever after with Lauren.

But the drama never stops for the stars of Jersey Shore.

Earlier this week, Mike shared the above throwback photo on Instagram.

“Beside every strong Man is an even Stronger Woman #collegesweethearts,” he captioned the pic.

Aside from some Random Capitalization, the whole thing seems pretty straightforward to us.

But apparently the post left some fans deeply confused.

Despite the fact that Mike and Lauren have explained many times that they broke up for several years and got back together, their relationship timeline remains a source of befuddlement for some.

“Let me ask you a question when you did the show Jersey Shore Mike were you still dating Lauren,” one commenter wrote.

Again, the situation (no pun intended) is neither unusual nor especially difficult to understand, but some folks just couldn’t seem to wrap their heads around it.

“And you continued to cheat on her those sequent seasons? Boooooo!” replied one user, whose reading comprehension skills should probably be called into question.

“Your [sic] an idiot! If you read the above caption it says we broke up season 1 of jersey shore and reconnected when it ended after season 6,” Mike replied.

“So when Jersey shore family vacation started we were back together. SMFH.”

Or are they struggling with the fact that Mike really was unattached during all those years of random hookups on the Shore?

Either way, it seems obvious to us that Mike never actually cheated on Lauren — but he might continue to have a hard time convincing his followers of that.

Fortunately, he’ll have plenty of time to explain.

Despite talk of Jersey Shore being canceled in the wake of the controversy surrounding Angelina Pivarnick’s wedding, Mike is one of the stars who has confirmed that he will be back for at least one more season.

We’d encourage him to keep it in his pants during filming, but he’s been doing that all along, and apparently fans are still convinced that he’s been unfaithful.

We guess you just can’t win with some people.