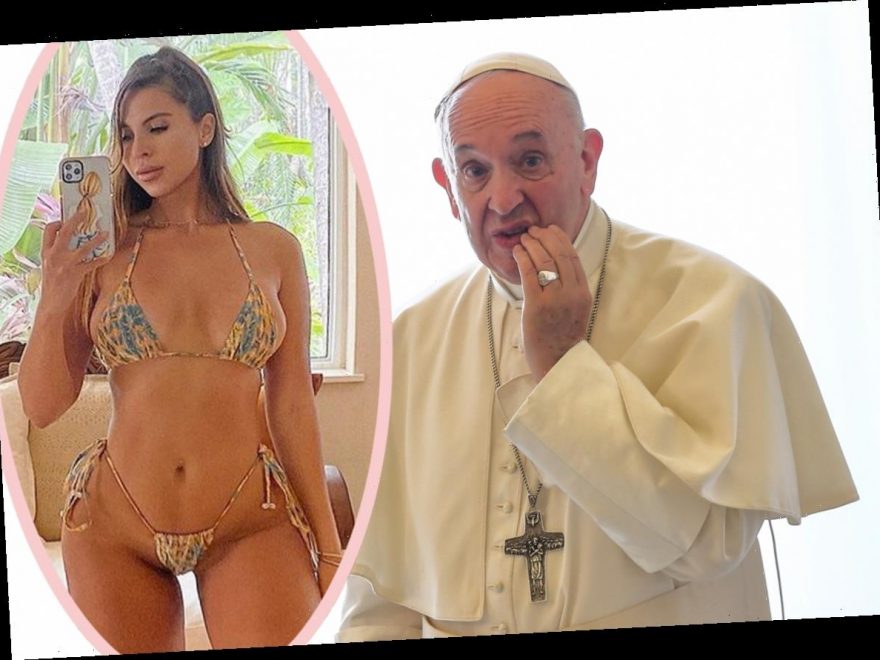 Has there ever been a more appropriate time to say: Holy S**t???

In a year of some of the most bizarre news items and crazy online drama, this may be the funniest story of 2020. Last Friday, it was reported that Pope Francis’s Instagram page had “liked” a photo of a Brazilian model, Natalia Garibotto.

If you happen to know the name, you already know the type of photo Natalia posts almost exclusively — bootylicious and often in a string bikini.

This one was even more egregious as it was in a naughty schoolgirl uniform, with the caption promising to followers that she “can teach you a thing or two” — complete with a little devil emoji!

There’s no way to confirm when exactly the photo was liked, but it was un-liked the following day. The Vatican had previously declined to comment, but the Catholic News Agency has now confirmed that an investigation is underway to determine how the racy photo ended up in the Pope’s “likes.”

Of course, the Pope himself doesn’t run his own social media accounts, so we can (unfortunately) eliminate the possibility of the Holy Father thirst-scrolling. The IG page, which has 7.4 million followers, is managed by a team of employees, so presumably, one of them was the culprit. However, a Vatican spokesperson told the Guardian:

“We can exclude that the ‘like’ came from the Holy See, and it has turned to Instagram for explanations.”

In other words, the Vatican is denying that anyone even ASSOCIATED with the Pope had anything to do with it! Right…

We’re gonna call BS on that for a few reasons. First of all, the Pope’s account doesn’t follow any other accounts, so someone actively had to seek out Natalia’s page to like it in the first place. (The snap was posted in early October, BTW, so someone was REALLY scrolling through her pics.) Second of all, if this was some strange IG hack, we find it VERY odd that all the hacker did was “like” one eyebrow-raising pic… they could cause a lot more chaos from the Pope’s account than thirsting over a Brazilian model. We mean, we’d be making all kinds of decrees!

So yeah, we think they should probably circle back on those social media staffers. (If you ask us, it seems like Harry Styles‘ Sara Lee character got a new gig! Ha!)

Meanwhile, Natalia and her management company are making the most out of the scandal. COY Co., which represents a number of scantily-clad ladies, reposted her photo to their IG with the caption:

“COY Co. has received the POPE’S OFFICIAL BLESSING thanks to our iconic queen @nataagataa

Legend has it, Pope Francis is subscribed to natagata . com under a pseudonym. Go check out Nata’s site to find out why

For her part, the model and Twitch streamer joked on Twitter:

“At least I’m going to heaven”

Let’s be honest, this whole thing is WAY more innocent than the Catholic Church’s other scandals. We’d actually like to thank whichever embarrassed staffer did this for the laugh!