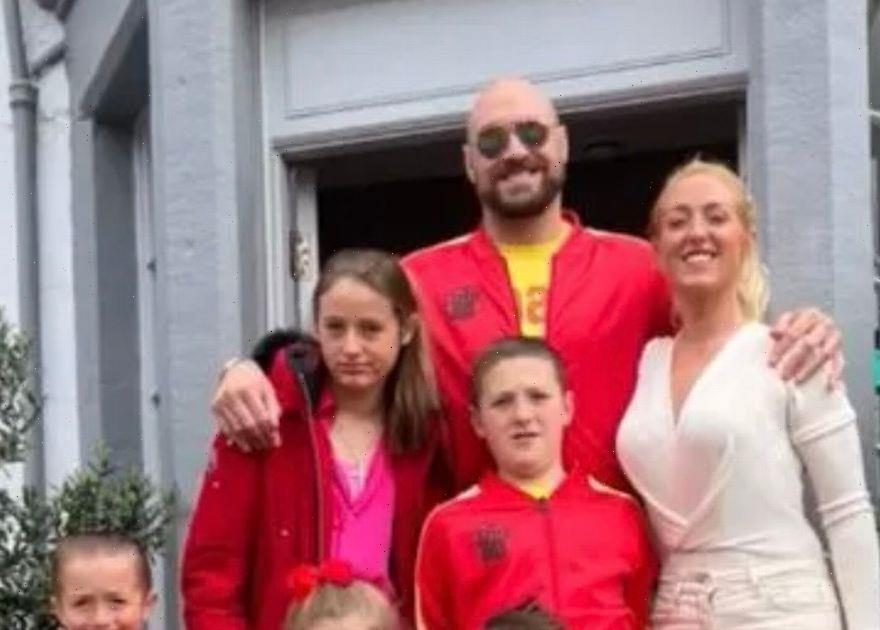 Paris Fury shared an adorable photo of her children sporting matching outfits with their dad Tyson during a sunny day out on Bank Holiday Monday.

Paris was also captured in the family snap along with the couple's youngest child, baby Athena, who was sitting in a pram to the side next to her mum.

Clearly still buzzing from husband Tyson’s defeat against Dillian Whyte days ago, Paris and the boxing champion appeared in happy spirits in the photo as they continued on celebrating the win with a day trip out with their brood at an eatery.

“Lovely day out with the fam. Blessed,” Tyson captioned as he shared the photo on Instagram also.

The 33 year old beat his rival in a sixth round knockout at Wembley Stadium on Saturday 25 April in front of tens of thousands of fans in a career-defining fight and has been in a triumphant mood ever since.

The Furys’ family day out follows the celebrations held in honour of Tyson’s win at Sheesh restaurant in Essex on the day after his fighting victory.

It was claimed by Tyson's boxing pal, before the professional boxer’s fight last month, that wife Paris is pregnant with their seventh child — although the pair have not confirmed the claims.

Carl Froch said on BBC Breakfast hours before the big fight: "He's got five or six children? I don't want to get it wrong, but he's got a lot of kids."

Carl then added: "I think Paris his wife is pregnant."

The couple have been open about wanting to expand their family, with the pair hoping to have at least 10 children, as revealed by Paris in her book Love and Fury: The Magic and Mayhem of Life with Tyson.

"Tyson and I had always intended to carry on the great Traveller tradition and have a big family: three children at the very least, we’d say to each other, maybe even ten if we were lucky,” she wrote.

Tyson told the Daily Mail last year: “Paris became my girlfriend when she was 15 and me 16. When time came for marriage, I asked her how many children she wanted. She said 10. I said that will do for me.

“Now we’ve decided to go for one more. Make it 11. Let’s have a mixed football team playing on the pitch at Morecambe.”