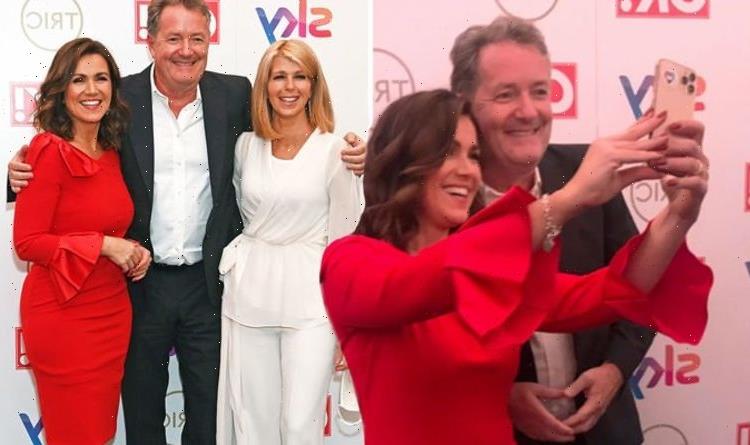 Piers Morgan and Susanna Reid, 50, were all smiles in their first red carpet appearance together since he left Good Morning Britain back in March. Taking to Twitter and Instagram this afternoon, the 56-year-old branded the moment “breaking news”.

The duo were seen beaming for the camera as she placed his arm around him.

The father-of-three sported a smart black suit with a white shirt, while Susanna wore a figure-hugging red dress.

Many of his eight million followers commented on the snap.

Thomson Julia commented: “Oh come on Piers, where is your coordinated tie, you’ve let the side down here, lovely to see you back together.”

Piers also caught up with his ex co-stars Kate Garraway and Ben Shephard.

In one snap, Ben jokingly hugged Susanna as Piers looked on in disgust.

The Tric Awards is the first time they’ve been publicly together since he left in March.

Piers’ departure was announced after he refused to apologise for comments he said about Meghan Markle.

The journalist said he didn’t believe what she and Prince Harry said in their bombshell interview with Oprah Winfrey.

Piers’ opinion sparked over 57,000 Ofcom complaints, one of which came from Meghan herself.

After his departure was announced, he said he still stood by his word and had to “agree to disagree” with producers.

He has since been replaced by various presenters including Ben, Martin Lewis and Richard Madeley.

On whether he’d ever return, he told the Mail Online this month: “I wouldn’t go back, not without a public apology and I’m not going to get one.

“I’ve got much bigger things coming up. The future is exciting.

“The next project is global, it’s big.”

“I can’t say what but people are going to hear about it within the next few weeks.”