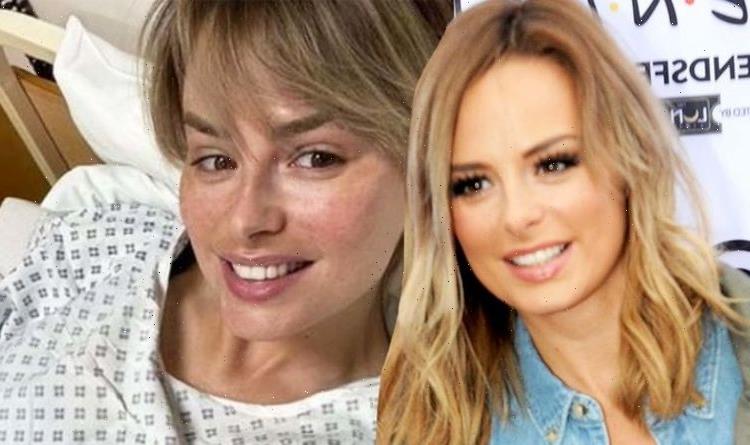 Rhian Sugden flaunts figure as she shows off her piano skills

Rhian Sugden, 35, spent the weekend in hospital after spotting two “suspicious looking” moles on her abdomen. The former Celebrity Big Brother star took to her Instagram account to share the news with her 471,000 followers.

She could be seen in a snap sporting a hospital gown while lying in her hospital bed.

Rhian explained: “Not so glamorous today!

“I’m getting some suspicious looking freckles/moles removed this morning.

“Wish me luck for a normal result.”

The TV star is set to undergo the operation today.

The update comes amid the star’s ongoing bid to have a baby with former Coronation Street actor husband Oliver Mellor, 40.

Rhian received her first IVF round in September last year.

She then underwent the treatment a second time, but it failed again.

The unsuccessful attempts left Rhian “broken” as she had gone through hormone injections for 10 days.

The star was told there was only a two per cent chance of an egg being fertilised.

One egg was then finally fertilised, but she had to wait two weeks to find out whether she was pregnant.

She sadly found out her pregnancy test had been negative.

Rhian told The Sun: “After getting so far on our second round it was really heartbreaking to find out it hadn’t worked.

“It ruined Christmas for us both and it has been really difficult to deal with – especially for me having all the hormones injected and placing all my hopes on one egg.”

“Infertility is something that isn’t really spoken about, and is something men and women shouldn’t be ashamed of.”

Earlier this year, Rhian revealed that her fourth round of IVF had failed.

She shared the update with her Instagram followers after previously discussing how she had been feeling about her situation.

Rhian penned: “Been feeling blue. Had a hell of a tough few weeks…

“For those that have been following my journey… IVF round 4 failed but it’s now time for me to pick myself up and carry on!”