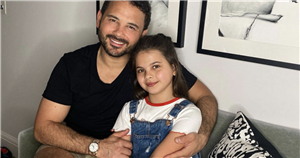 Ryan Thomas has proved that talent runs through his family as his daughter Scarlett showed off her impressive vocals in a sweet clip on Instagram.

The talented 12 year old belted out a version of Mariah Carey's hit classic One Sweet Day on a microphone at a garden party.

The brunette youngster appeared to be in her element as she showed fans what she could do as she sang to her heart's content.

Her uncle Scott Thomas proudly shared a video of her singing to his Instagram and gushed over his niece.

He wrote: "Honestly I still can't get my head round how beautiful and talented my not so little niece is. It literally blows my mind.

"I'm so grateful to have my beautiful family and I truly believe it's my biggest blessing in life.

"Have the best Friday guys and don't forget to spend sometime with your fam or good friends this weekend. Surround yourself with good energy."

Half way through the song, Scarlett turned around to the DJ and said: "This vibe is dead, it's Thomas bro friday, drop a beat DJ."

At that point, her dad Ryan, uncles Scott and Adam, as well as cousin Teddy came rushing out and began dancing to an upbeat track.

The group of five were living it up in their back garden and engaging in a dance battle.

He is also dad to one year old son Roman with fiancée Lucy Mecklenburgh.

The former soap star previously broke down in tears as he was emotionally reunited with his daughter Scarlett after walking 78 miles in a bid to raise awareness of male suicide.

The dad-of-two was surprised by Scarlett who was hiding in the back of a van as he completed his seventh day of walking 10 marathons.

Scott shared the adorable reunion on Instagram as he showed Ryan finishing in front of a crowd of people clapping and congratulating him for completing his fundraiser, which raised money for the charity CALM.

As he stopped in front of a large van, the back door rolled up and showed Scarlett stood in side with her arms extended for a hug.