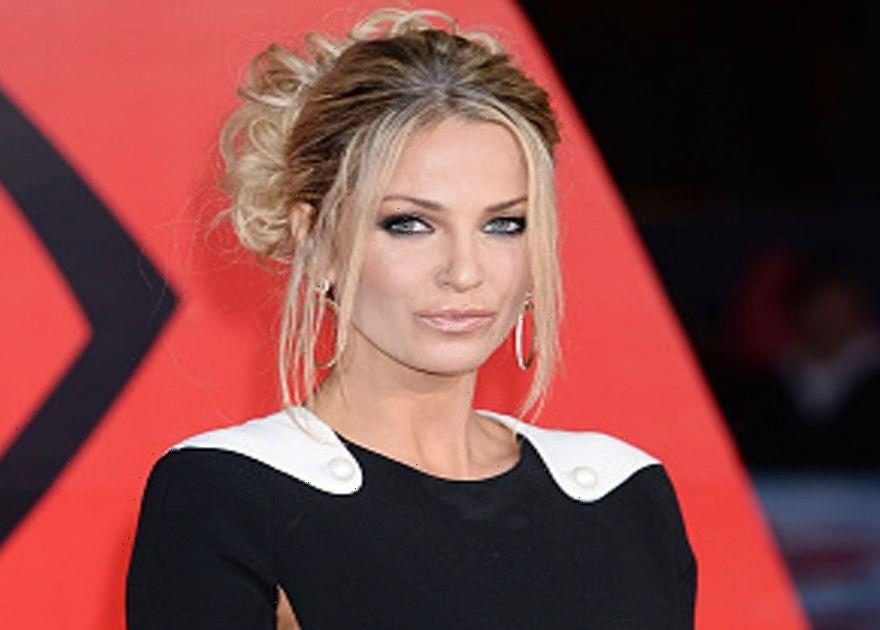 It was announced on Sunday 5 September that Sarah Harding had tragically died after her battle with cancer aged 39.

The late singer's mum Marie took to her daughter's Instagram feed to announce the heartbreaking news with her 383,000 followers, writing: "It is with deep heartbreak that today I’m sharing the news that my beautiful daughter Sarah has sadly passed away."

Sarah revealed in August 2020 that she had been diagnosed with breast cancer, which had spread to other parts of her body that summer.

In March 2021, the late singer released her memoir, Hear Me Out, which detailed "my story, my words, my life" and where she candidly discussed her cancer battle.

Sarah revealed in August 2020 that she had been diagnosed with breast cancer in an emotional social media post.

Posting a picture of herself in a hospital bed, she penned at the time: "Hi everyone, I hope you are all keeping safe and well during these uncertain times. I’ve not posted on here for so long, thank you to everyone who has reached out to check in on me, it really does mean a lot.

"I feel now is the right time to share what’s been going on. There’s no easy way to say this and actually it doesn’t even feel real writing this, but here goes.

"Earlier this year I was diagnosed with breast cancer and a couple of weeks ago I received the devastating news that the cancer has advanced to other parts of my body. I’m currently undergoing weekly chemotherapy sessions and I am fighting as hard as I possibly can.

"I understand this might be shocking to read on social media and that really isn’t my intention. But last week it was mentioned online that I had been seen in hospital, so I feel now is the time to let people know what’s going on and this is the best way I can think of to do so.

"My amazing mum, family and close friends are helping me through this, and I want to say a thank you to the wonderful NHS doctors and nurses who have been and continue to be heroes.

"I am doing my very best to keep positive and will keep you updated here with how I’m getting on. In the meantime I hope you’ll all understand and respect my request for privacy during this difficult time. Sending you all so much love….xx."

"I can’t deny that things are tough right now"

In December 2020, Sarah issued an update to fans on her Instagram where she thanked fans for all of their support.

Posting a childhood throwback snap, she wrote at the time: "Hi everyone. Thank you so much for all the messages of love and support that I’ve received since my last post.

"Everyone has been so kind and reading your comments and DMs has been such a huge source of strength to me. I can’t deny that things are tough right now but I’m fighting as hard as I possibly can and being as brave as I know how.

"In September the lovely people at Ebury Publishing asked me if I would be interested in writing a book about my life story. It came at such a good time for me as it’s given me something fun and positive to focus on while I’ve been stuck at home in between trips to the hospital for treatment.

"I’ve nearly finished it now and this week Mum and I have been looking though old photos choosing which ones to include. It’ll be out after Christmas and I’m really proud of it. I hope you’ll like it. Sending lots of love to everyone – I hope you’re all keeping well – S x."

Released memoir Hear Me Out

Sarah's memoir, Hear Me Out, was published in March and the star took to Instagram at the time to thank fans for their support.

She penned: "I can’t thank everyone enough for all the kind and loving messages that I’ve received since the weekend. It means so much to me and to my mum. Today’s a special day because it’s publication day for Hear Me Out. At last. I actually can’t believe I’ve done it!

"What started out a dream idea last summer is now a reality. I hope you enjoy reading my story. The picture on the front of the book was taken by the amazing @ruthrosephotos a few years ago.

"I thought I’d share this little behind the scenes shot here. It’s a lot more sophisticated than some of the older pics in the book. Can’t wait for you all to see them. Sending lots of love as always, S x."

Nearly died of sepsis and put in a coma

In her memoir, Sarah admitted she avoided seeing her doctor because of coronavirus and revealed how she thought she had a cyst before her diagnosis.

She wrote: “At first I thought it was just a cyst. The trouble was the pain was getting worse. It got so bad that I couldn’t sleep in a bed. Eventually my skin started to bruise. By now I was terrified.

“One day I woke up realising I’d been in denial. Yes there was a pandemic but it was almost as if I’d been using that as an excuse not to face up to the fact that something was very wrong.”

Sarah did open up about her cancer diagnosis with her fans in the candid Instagram post, but didn’t reveal how she was rushed to intensive care before her chemotherapy began as she was diagnosed with sepsis.

She wrote: “With both my lungs and kidneys failing, doctors decided to put me into an induced coma.

“Even once I was off the ventilator I couldn’t speak properly. All I could do was make noises like a chimpanzee trying to communicate.”

Sarah then went on to start her chemotherapy treatment and have a mastectomy.

Reflecting on the mastectomy procedure, which is an operation to remove a breast, she added: “I remember the surgeons saying they would make a drawing of what parts of my breast needed to be taken away and it was virtually all of it.

“I’m so glad that Mum was there waiting for me because when I woke up I screamed the place down. Now there’s just a bunch of stitches where my breast used to be.

“I can’t look at myself in the mirror anymore. I don’t recognise myself.”

Told by doctors Christmas 2020 was "probably her last"

In her book, Sarah revealed that she was told by doctors that Christmas 2020 would be her last.

The singer wrote: “In December my doctor told me that the upcoming Christmas would probably be my last.”

“I don’t want an exact prognosis. I don’t know why anyone would want that.

“Comfort and being as pain-free as possible is what’s important to me now.”

Sarah also added that she was focussing on enjoying “every second of my life, however long it might be”.

She explained: “I am having a glass of wine or two during all this, because it helps me relax. I’m sure some people might think that’s not a great idea, but I want to try to enjoy myself.

“I’m at a stage now where I don’t know how many months I have left. Who knows, maybe I’ll surprise everyone, but that’s how I’m looking at things.”

Revealed "comfort" she will "probably die before her mum Marie"

In her memoir, Sarah revealed that she felt "strangely comforted" that she will "probably" die before her mum Marie, who is in her late seventies..

Explaining that her mum Marie had been by her side, helping her throughout her horrific cancer battle every step of the way, Sarah wrote: "Mum is in her late seventies now and she has become everything to me through this illness, especially since I've been staying with her.

"I know how hard this is on her too. I often worry about her, especially as she's gotten older. I can't bear the thought of anything happening to her."

Sarah continued: "In a strange way it's comforting to know that I will probably leave this world before she does; at least then I won't have to go through the pain of losing her.

"The truth is, I can't live without her now, she cares for me and helps me because, at times, I am too weak to help myself."

"Made her cry" that cancer ended her baby dreams

Sarah revealed in her memoir that her dreams of becoming a mother had been stolen after undergoing intensive chemotherapy for her breast cancer.

The late star wrote in her book that it made her “cry” thinking about how she won’t ever get the chance to have children.

“It might seem odd to worry about not having children when I don’t even know how much of a life I have left, but it’s there,” she shared.

“The truth is, even if my prognosis is better, it still wouldn’t be on the cards because of all the chemotherapy I’ve had.

“That treatment, harsh as it is, will have killed any chance I might have had. It’s making me cry just thinking about it.”

After finding out she had breast cancer in early 2020, Sarah revealed that she turned to Girls Aloud bandmate Nadine Coyle for support to cope with the diagnosis.

Writing in her book, Sarah admitted she was a "mess" when she was told the heartbreaking news.

She explained that she spent the evening with pal Nadine after finding out her diagnosis, and the pair cried and drank wine together.

Nadine travelled up to Manchester to see Sarah during a brief break in lockdowns back in December 2020.

Sarah wrote in her book: "Throughout the evening, we all had our moments of hysterical laughter followed by tears.

"At one point, Nadine told me in no uncertain terms how much she cared about me: 'You don't understand, Sarah. I love you!"

The close friends bought a Christmas tree, exchanged gifts and Nadine cooked for the pair.

They stayed up late into the night and ate cheese and biscuits while talking to one another.

The Celebrity Big Brother star added: "OK, so it wasn't like the nights of wild partying I did back in the day, but it was still very special."

During her last months, fans and close friends of the star rallied around to be there for her when they could.

They supported the star with her memoir and downloading her single Wear It Like A Crown, which was number one in the charts.

For the latest showbiz news and updates, sign up to our daily OK! newsletter.