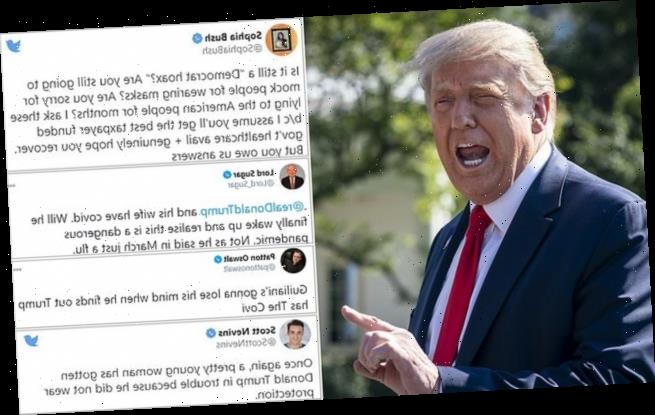 Celebrities have mocked Donald Trump and his wife Melania after he announced he had tested positive for coronavirus in the early hours of Friday.

Actress and model Padma Lakshmi, 50, posted a one-word response that simply read, ‘Karma’ for her nearly 740,000 followers on Twitter.

Actress and activist Sophia Bush, 38, echoed many others who pointed out that Trump has referred to the coronavirus pandemic as a ‘hoax’.

‘Is it still a ‘Democrat hoax?’ Are you still going to mock people for wearing masks? Are you sorry for lying to the American people for months? I ask these b/c I assume you’ll get the best taxpayer funded gov’t healthcare avail + genuinely hope you recover. But you owe us answers,’ Sophia tweeted.

It comes after the president tweeted shortly before 1am EST: ‘Tonight, @FLOTUS and I tested positive for COVID-19. We will begin our quarantine and recovery process immediately. We will get through this TOGETHER!’ 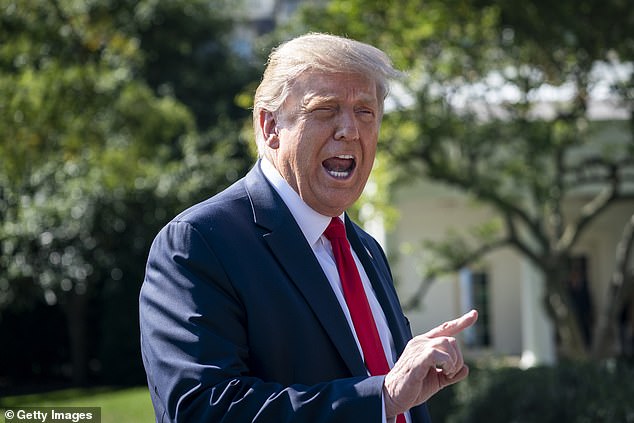 Trump has been savaged on social media after revealing via his Twitter account early Friday that he tested positive for coronavirus (pictured: Trump outside the White House on Wednesday) 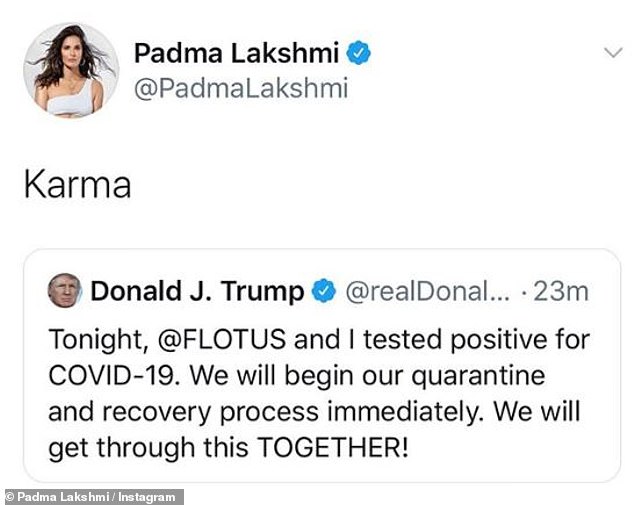 One word: Social media lit up after President Donald Trump announced on Twitter that he and First Lady Melania Trump have tested positive for COVID-19 including Padma Lakshmi who posted one word: ‘Karma’

Democrat hoax: Sophia Bush asked on Twitter if the coronavirus was still a ‘Democrat hoax’

Star of the UK version of The Apprentice, Lord Alan Sugar, tweeted that Trump might ‘finally wake up and realise this is a dangerous pandemic’

Positive side: Star Wars actor Mark Hamill, 69, tried to find the positive in the situation

No protection: Scottt Nevis also tweeted, ‘Once again, a pretty young woman has gotten Donald Trump in trouble because he did not wear protection’

The Trumps were tested after the president’s close aide, Hope Hicks, 31, tested positive for the disease.

Hicks had travelled with the president to a campaign rally on Wednesday aboard Air Force One and started feeling poorly on the way back to Washington.

Radio and TV host Scott Nevins tweeted: ‘Once again, a pretty young woman has gotten Donald Trump in trouble because he did not wear protection’.

Songstress Aubrey O’Day said crudely: ‘I think he got it banging Hope.’

Star Wars actor Mark Hamill, 69, said that the disease might have benefits and help people to realise that the virus can infect even the most powerful man in the world.

‘If anything positive can come him testing positive, it would be his followers reevaluating their opinions. If they will now accept a lockdown, social distancing & mandatory mask-wearing, we could crush the virus like we should have from the start.’ Hamill tweeted.

Trump’s British counterpart, Alan Sugar of the BBC’s Apprentice show, said that the president might ‘finally wake up and realise this is a dangerous pandemic.’

Late night host Jimmy Kimmel, 52, joked: ‘Does anyone know why @Mike_Pence is running around in circles, throwing little pieces of Wonder bread in the air?’

The Masked Singer panelist Ken Jeong, 51, went all capital letters as he tweeted, ‘DON’T DENY THE SCIENCE!!!!!!!’, along with a plea for people to wear a mask.

Whitney Cummings, 38, took to Twitter with a reference to one of the symptoms of coronavirus.

‘Of course Trump didn’t know he had covid he never had taste in the first place?,’ she tweeted.

Scrubs actor Zach Braff also chimed in and posted, ‘But we were told this was a hoax’.

Former figure skating champion Adam Rippon also said he was screaming out loud that Trump has the ‘hoax virus’.

Descendants actress Dove Cameron, 24, also questioned why Trump had been tested for the ‘hoax’.

Stranger Things star Shannon Purser added: ‘The fact that two most protected people in our country got COVID… like, they had every opportunity and resource needed to not get sick but science denial is a trip!’

Actress and political activist Alyssa Milano tweeted: ‘As someone who has had #COVID19 and still suffers from post-covid syndrome, I can honestly say with all that I am that I wouldn’t wish this virus on my worst enemy. Please wear a mask.’