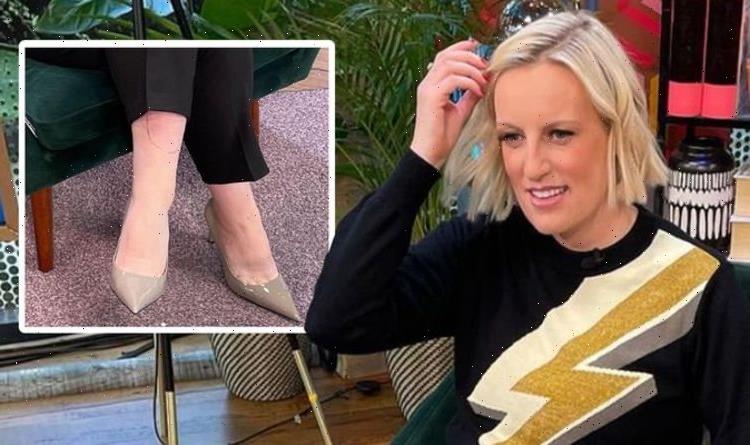 Steph McGovern details 'drama' over insect bite on her leg

Steph McGovern, 39, took to Instagram on Wednesday evening to update her fans on her health after she noticed a worrying bite on her leg earlier this week. The TV star had recently detailed her latest “medical drama” following a weekend break in Belfast, where she then revealed she had been diagnosed with Cellulitis.

The leg swelling has now gone down! Phew

Steph was put on antibiotics after visiting the doctor with her swollen leg, which was understood to be caused by an insect bite.

Cellulitis is an infection caused by bacteria getting into the deeper layers of your skin.

According to the NHS, if not treated quickly, the infection can spread to other parts of the body such as the blood, muscles and bones.

Following the worrying ordeal, she shared an update on social media to reassure fans she was on the mend.

Posting a a series of snaps of her sat in her regular spot in the studio of Steph’s Packed Lunch, she wrote: “Spot the eyeliner mark on my leg from where the doc told me to draw a circle round the swelling from a bite (to keep an eye on how bad it was getting)!!

“Fortunately we spotted it before the show started and quickly rubbed it off.”

She added: “BTW the leg swelling has now gone down! Phew.”

It comes after she was told to document the size of the bite with a circle so medics could monitor its growth.

The host had previously shared her concern after first spotting the painful nibble on her shin.

“My latest medical drama…” she began.

“I was on a flight back from Belfast on Sunday eve when I noticed my leg felt itchy.

“I looked down at my shin and could see a red lump.

Steph then shared a snap of the red lump, which appeared before she went on-air.

A doctor told her to draw a circle around the swelling to see if it got bigger.

In another update, the presenter revealed it had worsened.

She then shared a picture of a bigger red patch on her leg, taken behind-the-scenes before her show on Tuesday.

“And bigger!!! Full on swollen leg,” she sighed.