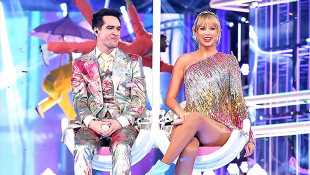 Panic! At The Disco vocalist Brendon Urie just threw some MAJOR shade at Scooter Braun. Amid the highly-publicized feud with Taylor Swift, Brendon has Tay’s back all the way.

Brendon Urie, 32, is standing behind Taylor Swift, 29, amid her feud with Scooter Braun. The Panic! At The Disco singer took to the internet with an expletive-filled ran against the 38-year-old music mogul, two days after he bought the rights to Taylor’s music catalogue. The pop rocker released a chart-topping hit “ME!” with Taylor earlier this summer and clearly, he’s got her back all the way. “This Scooter Braun s**t, like what a piece of s**t, right?” he began during a Twitch video livestream. “You guys know about this dude? It just like broke my heart, I read Taylor’s statement and I was like, ‘That sounds about right, you know?’ Toxic dudes doing toxic bulls**t in this toxic industry,” he said. The “High Hopes” singer did NOT hold back.

As celebrities continue to take sides in the dividing dispute, Brendon made it very clear whose side he’s on. “I thought that was illegal — to do a business turn behind the people who wrote the stuff,”he continued. “Like you can’t do it without their knowledge? There’s a certain amount of time legally that you have to let the people know, there’s gotta be a precedent for that…not toxic masculinity. I stand with Taylor, of course, it’s a sh** show to learn how awful people can be just for some profit and maybe some clout,” he told his fans.

However, not everyone appears to be ‘siding’ with Taylor. In fact, after a slew of stars defended Scooter on social media, Taylor cut ties with them and blocked them from her Spotify account. Justin Bieber, 25, was one of the musicians to get the boot after he posted a lengthy Instagram message supporting Scooter, his current manager. Then, Demi Lovato, 26, did the same with multiple posts to her IG stories where she insisted Scooter to be a “good man.” When Kacey Musgraves, 30, hit the ‘like’ button on Scooter’s wife’s social media post defending him, Taylor gave her the boot from her Spotify catalogue as well.

That being said, a large number of stars have spoken out in support of Taylor. In addition to Brendon, the likes of Rihanna, Miley Cyrus, Nicki Minaj, Camila Cabello, Selena Gomez, Adele, and Gwen Stefani have all appeared to unfollow Scooter in a nod of support to Tay. Halsey even wrote a lengthy tweet describing how Taylor was the inspiration behind why she writes all of her own music which ended with “I am standing with her.” Taylor was so moved that she even retweeted Halsey’s message to her own Twitter page.

The ongoing feud all stems from Scooter’s June 30 acquisition of Big Machine label group which in turn made him the owner of the bulk of Taylor’s discography. The pop star slammed the sale of her earliest records to the music mogul, claiming that he has been a part of campaigns to bully her over the past few years during her “lowest” point.