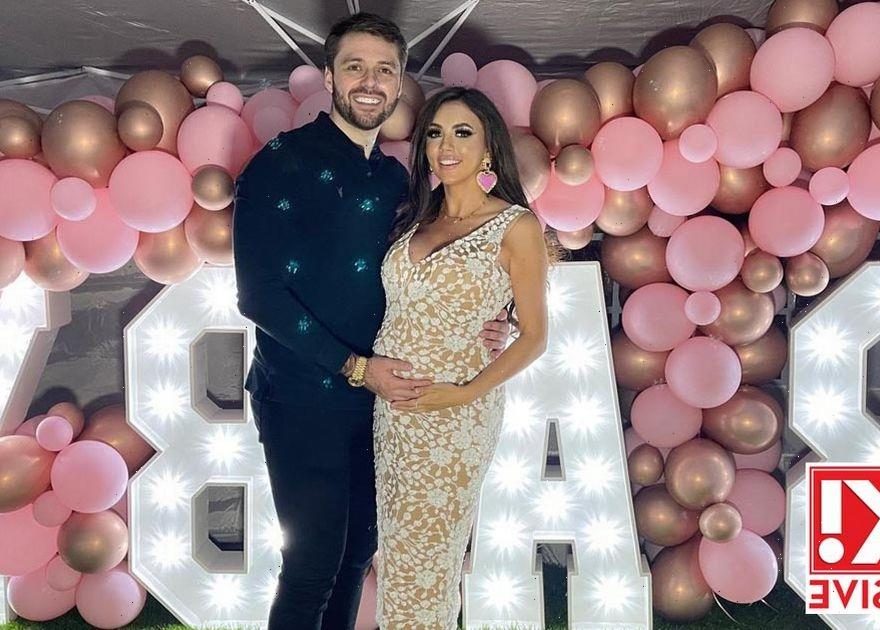 The Voice UK star Lydia Lucy invited OK! to her pink-themed baby shower as she counts down the weeks before welcoming her baby girl.

The 28 year old announced exclusively with OK! last month how she is expecting her first child just months after a devastating miscarriage.

After a number of health scares – including suspected sepsis – Lydia is now throwing herself into work as she gears up to give birth.

In our intimate chat, Lydia talks us through the emotional baby shower, admits how she feels pregnancy has changed her as a person, and reveals why partner Tommy had to calm down with a beer after one of the games!

Tell us all about your baby shower…

Oh it was amazing! It was such a lovely day, it was absolutely beautiful. My friends and family just did the most amazing job. It was all a surprise to me, I didn't really know what was happening. It was just a really, really lovely day, really beautiful. Everything was pink and we were joking that the baby's going to come out and be a boy!

It looked like quite the turn out! Who was there for your special day?

There were about 30 of us! I had my mum, my grandma and my partner's mum and his nan was there too. All my best friends were there, it was just such a lovely day. I had everybody that I wanted there and I just couldn't have asked for anything more.

Are all the grandmas and great grandmas excited to meet the baby?

They can't wait! It was a little bit overwhelming, actually. All the nannies and grandmas and great grandmas are overly, overly excited and can't wait for her to come.

Did it get emotional at all?

Yeah, I got really emotional. All of the family were very emotional, as well. My partner came back with mine and his dad's too once we'd played all the games and had our ladies' shower and then it was very emotional once we were all together. It was just a lovely celebration, we can't wait for the baby's arrival. It's all becoming quite real now.

It sounds like so much fun! What games did you play?

We played a game where we had to smell a nappy and guess what was in it, which was not my cup of tea! Tommy played that one, too and he didn't get on very well but he's going to have to get used to it! He had to have a beer to take his mind off it.

We did the baby food game as well, so we had to eat a bit of baby food and guess what it was which isn't great either if you haven't got a strong tummy!

And then we played stuff like baby charades and had to guess what people were doing, like going into labour and waters breaking, things like that.

How far along into the pregnancy are you now?

I'm 29 weeks so not long at all, and I've got a funny feeling that she's going to make an appearance early. I don't know why but I'm still quite active with work and she's always on the go in my belly so I just think she will be early.

How are you finding juggling work with being pregnant?

I'll be honest, I've had a really busy couple of weeks and I'm feeling very tired at the moment, but I'm trying my best to actually pull through.

It's been a little bit of a struggle because I've been sleeping on tour buses and, it's really funny, my band have been sort of taking the Mickey out of me and calling me a sausage roll because I have to roll into the bed on the bus because I've got quite a big bump now. It's been a bit of a challenge but I'm trying my best to to keep strong and get as much rest as I can and continue to fulfil my gigs that I have booked.

The last time we spoke you said you were scared about going into labour, is that still the case?

I am, yes, but I have been having pregnancy yoga classes and pregnancy reflexology which I think has been calming me down quite a bit, but I still am very nervous.

I think, as humans, we are all sort of scared of the unknown. I've never been through this before so I don't know what's going to happen, what the pain is going to be like. I'm a bit apprehensive about what's gonna happen to me, what if I'm not going to be able to take on this pain? You hear all different things and some people say, 'Oh, you know, it's amazing,' then other people say it's awful! I think if anybody said they weren't scared for the first time then they're probably telling a little fib. I am excited as well though because it's so rewarding at the end.

Do you think you've learnt anything about yourself during your pregnancy?

I definitely have, I feel like it's actually opened my mind and actually changed me a little bit as a person. I used to be quite hotheaded and, I still can be, but I think that I've really calmed down and it's sort of mellowed me out a bit. I'm trying to learn to destress in situations that maybe before I would have been very stressed out in.

You see yourself growing, it's such a weird feeling as a woman because, you know, your body is not really your own anymore, you're carrying another human inside and it's absolutely amazing.

I never thought this would happen to me even though I wanted it, it's actually a very surreal feeling, and sometimes I forget because I've been rushing around doing things and then I see myself with this bump!

I think it's changed me for the better, I've been on a bit of a self discovery journey and it's amazing. I think any mother or expecting mother will tell you the same, it's just such an unusual but beautiful journey.

When we last spoke to you, you were in hospital with some quite serious complications, how are you now?

Touch wood, I've been on the mend! I'm still taking some medication but I've tried to destress myself because I think stress has a big impact on your health. I've tried to sort of take away toxic things that could potentially be causing me harm and and causing me to become very ill and and I feel much better. I've just gotta try and stay on this positive path and and think positive thoughts so that I don't have anymore complications because I think I've had my fair share! Hopefully this is just going to be the last part where I'm going to feel quite heavy and weighty but, you know, I'm happy to do that as long as I don't have anymore complications.

For the latest on Lydia's pregnancy journey, make sure you sign up to OK!'s daily newsletter.