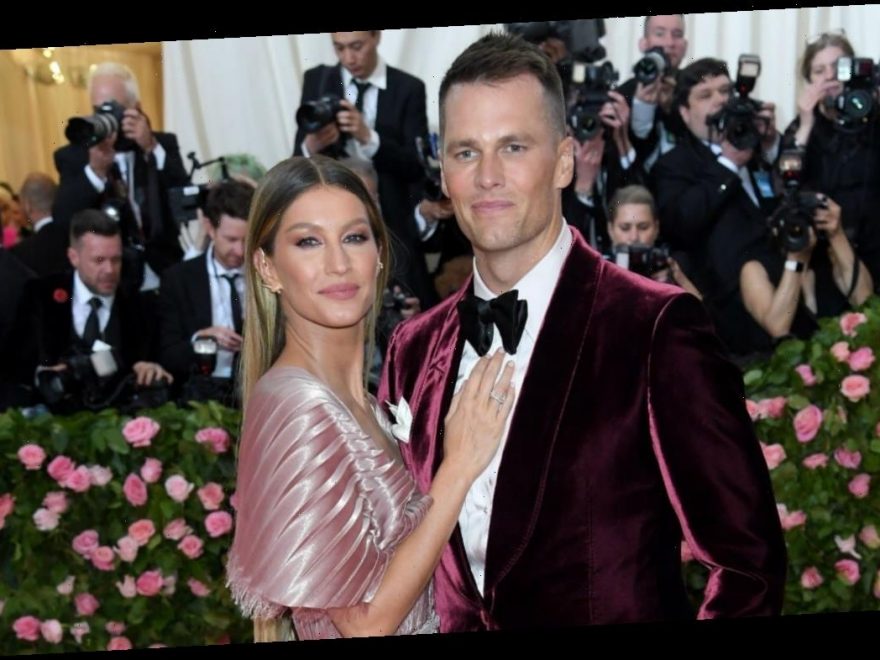 Tom Brady is thankful for his wife. The 43-year-old Tampa Bay Buccaneers quarterback spoke to Michael Strahan on Wednesday’s episode of Good Morning America, and gushed about how Gisele Bündchen supports him.

“I give her a lot of credit for that,” he said of him and Bündchen reaching their 12th anniversary in February. “She’s the one that supports the family. She’s the one that, at the end of the day, makes a lot of sacrifices.”

“She brings out the best version of me,” he added.

Brady and Bündchen share two children, Benjamin, 11, and Vivian, 8, and work hard to pass important lessons down to them. Brady is also dad to 13-year-old John with his ex, Bridget Moynahan.

GMA EXCLUSIVE: “She brings out the best version of me.” @TomBrady sits down one-on-one with @michaelstrahan to talk about his 12-year marriage to Gisele and spending quality time with his kids in the off season. https://t.co/WRa19Pkehypic.twitter.com/P99zZ8JVpq

Brady’s family has been busy traveling and spending time together since he led the Bucs to a Super Bowl victory against the Kansas City Chiefs in February.

The title marked Brady’s first as a Buc, after he spent nearly 20 years as a New England Patriot. He was criticized over his decision to leave the Patriots, but Brady thinks that led to his ultimate success.

“I was always kind of motivated by people that say, ‘You can’t do it. You’re not good enough. You’re not fast enough, not big enough. You’re not a good enough arm,'” he said. “I’ve had a body of work over a period of time… I think that’s a great part about football. It’s not really about what you did last year, it’s kind of what you’re going to do this year. So, for me, it was what I was going to do for the Bucs last year. I still feel that way.”

“All of it was really, really amazing, obviously, with the way the season ended,” he added. “It was a great year.”

Brady and the rest of the Buccaneers celebrated their Super Bowl victory with a boat parade, during which the quarterback threw the Lombardi Trophy to another boat in a now-viral moment.

“From what I remember, it was really cool,” Brady quipped of the celebration. “There was not a lot going through my mind at that point.”

“That was not smart for a couple of reasons. One is if we drop it, that’s a little bit of a problem. But the worst thing that could happen is the edges on that trophy are so sharp. Had those things clipped one of my boys on the other boat, it would have been an ugly, ugly parade,” he continued of throwing the trophy. “I had a lot of fun, and I don’t get to do that. It’s hard to relax when you’re out in public… I tend to just stay at home more and I don’t go out a lot.”

GMA EXCLUSIVE: “There was not a lot going through my mind at that point. I mean, that was not smart.” @TomBrady jokes with @michaelstrahan about throwing the Lombardi Trophy at the boat parade following the Bucs #SuperBowl win. https://t.co/WRa19Pkehypic.twitter.com/2HV7aJV1yq

Brady noted that, even after notching his seventh Super Bowl win, he has no plans to retire.

“I don’t think proving it for me is the motivation. I still want to play,” he said. “I got like a little sickness in me that just wants to throw a freakin’ spiral.”

“Once you’ve stopped, you can’t go back and do it,” Brady added. “I got some more football [in me]. I mean, not a lot, and I know that, but what I got left, I’m gonna go, I’m gonna give everything I got.”

GMA EXCLUSIVE: "I still want to play…I got a little sickness in me that just wants to throw a freaking spiral." @TomBrady tells @michaelstrahan he's got "some more football in me." https://t.co/WRa19Pkehypic.twitter.com/kdu5Aq03Xl

Watch the video below for more on Brady.