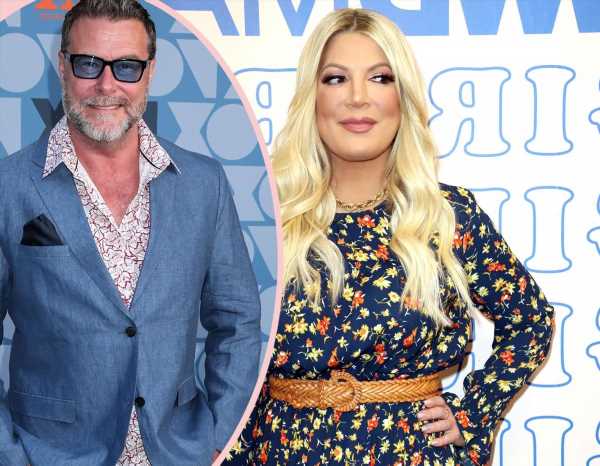 It sounds like Tori Spelling and Dean McDermott aren’t still living in a complete state of marital bliss — so much so they’re not even sharing a bed anymore!

On Wednesday, the 48-year-old was a guest on SiriusXM’s Jeff Lewis Live, and the titular host brought up the rumors swirling around about the Beverly Hills 90210 alum’s troubled marriage. He said:

“No, ‘cause then you spill my s**t right here. Of course, I’m not going to tell you what’s really going on.”

But that didn’t stop the host from pressing on. He then questioned Tori about a paparazzi image from March that showed her without a wedding ring on:

“What is really going on? You put the wedding ring on. Are things okay? Because I feel like the last time you were here things were good, you were having sex. Are you guys sleeping in the same bed?”

“You know what, right now my kids and dogs sleep in my bed.”

Oof, that’s bad. Lewis attempted to clarify her statement by asking if Dean was currently “in the guest room,” but Spelling remained rather coy after that, responding:

A room, not the room. Yikes…

After the radio personality asked if there was any “truth” to the potential breakup whispers, the actress said four of their five children have been sleeping in her room while McDermott was away for months to film. And let’s just say, her words spoke volumes:

“Since he left — this is not good, you guys — but since he left, he was gone for six months filming in another country, they all stayed with me. So I currently still have four in the bedroom with me who have yet to go back to their rooms.”

It’s safe to say things aren’t looking up for the couple! As you may know, the pair previously went through some public relationship woes after he admitted to cheating on her in 2014. Following the affair, the duo started their reality series, True Tori, during which McDermott confessed to how much “shame” he felt over his past transgressions. Spelling also previously dished to People about the infidelity scandal, saying:

“We had to start over. We had to completely rebuild. … It was one of the worst times in our lives, but it was also one of the best times. I wouldn’t change anything because if we hadn’t started talking and opened up those lines of communication, maybe we wouldn’t be here today.”

Unfortunately, it seems like the foundation they’ve built since then might be crumbling down again! Do U think Tori and Dean are headed (or already have headed) to splitsville? Let us know in the comments (below).