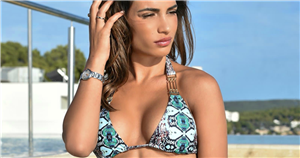 Nicole Bass has revealed that her best friend Clelia Theodorou is now friends with Rem Larue after their fallout.

The Only Way Is Essex star Nicole, 29, also revealed her stunning bestie Clelia, 26, “isn’t ruling out dating” after the explosive row with Rem on the reality show.

Clelia and 27 year old Rem butted heads after the blonde Plymouth-born model decided to cool of their romance after around three weeks of dating.

TOWIE newbie Rem was unimpressed with how Clelia decided to break the news to him.

Clelia explained to Rem on the show: “I wanted to… Obviously I know you’ve been messaging and asking how I’m doing and stuff and I know I’ve been really rubbish at getting back to you.

“But, I think I’ve been trying to figure out in my head where I’m at with it all and I just don’t know if I’m there.”

As Clelia revealed she was unsure of her feelings to Rem, he said: “Why haven’t you come and spoken to me about this before?

“For me, it’s a liberty because for the last week or so I’ve been messaging you and you’e taken three or four hours to reply. If there’s a problem, come all to me about it.”

But, after vowing to apologise to the brunette stunner, it appears the pair have cleared the air and are now friends, according to Nicole.

Speaking in an exclusive interview with OK!, Nicole said: “I like Rem, him and Celia are friends and that’s amazing, he wanted to apologise and I thought it was the right thing to do.”

When quizzed about viewers divided opinion on the fallout, Nicole added: “I think I got both points of the Celia and Rem fallout but Celia is my best friend so I will always be there for her first and foremost.

Nicole also revealed how Clelia’s latest dating experience hasn’t put her off of dating and is still looking for her “soul mate”.

“She isn’t ruling out dating! She just hasn’t met her soul mate just yet, but I know she will, she’s an amazing girl with a caring heart and will meet her dream man when the time is right.”

The latest episode of the series appeared to show a fallout between Nicole and Pete Wicks, over his reaction to Rem revealing he would apologise to Clelia.

But, Nicole has insisted the exchange was just banter.

She explained: “It was a joke between Pete & I, it wasn’t an argument.

“We have been friends since I was young, it was a little bit of banter!

“Nothing serious, I adore Pete & would never want to fall out with him.”

The Only Way Is Essex, ITVBe Sundays 9pm