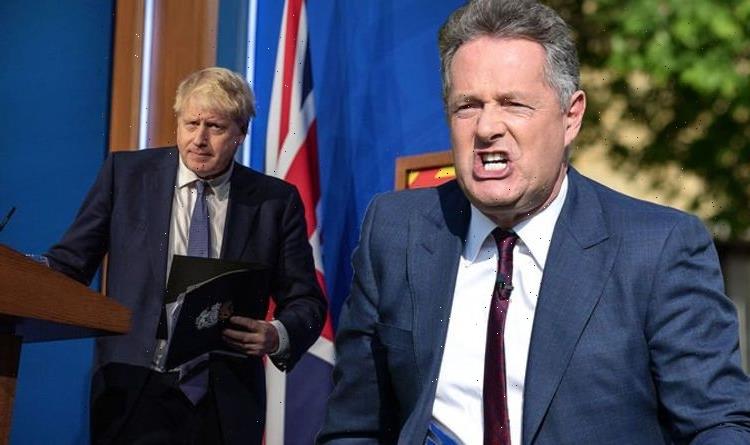 Journalist Piers Morgan has branded the Prime Minister “a shambles” in his latest column. Piers also claimed that Boris Johnson has “destroyed trust” between himself and the public that he is supposed to represent.

In his sizzling new column for The Sun, Piers said that Boris was “officially a shambles”, despite admitting that he preferred the Prime Minister to what he referred to as “the dreary, joy-sucking woke brigade”.

Under the heading “you have destroyed trust”, Piers then got into the reasoning behind his frustration at Boris.

“Let’s be frank,” he wrote. “You’ve destroyed much of that trust in just two disastrous years, and many of those people who broke the habit of a lifetime to vote Tory because they admired your ‘Let’s get Brexit done!’ chutzpah are now so disillusioned, they’re telling pollsters they’ll never support you again.”

The former Good Morning Britain presenter went on to claim that the Prime Minister’s “crashing personal popularity” was also affecting the popularity of his party.

While he acknowledge that the pandemic would be a challenging time for any leader, he nonetheless branded Boris’s handling of the Covid-19 crisis a “disaster”.

He wrote: “Your chaotic early handling of the crisis was a disaster, with deadly dithering and shameful failings on everything from PPE and testing to care homes and border control.

“That’s why we have the highest number of coronavirus deaths in Europe, and why we suffered the worst economic slump of any G7 nation.”

Piers went on to praise the government’s “brilliant vaccine roll-out”, and its furlough scheme which was helmed by Chancellor of the Exchequer Rishi Sunak, but one again condemned Boris for his crisis management skills.

“But staggeringly, it’s not even this ineptitude which has morphed you so quickly from political winner to political liability,” Piers continued. “What’s wrecking your premiership is your aversion to honesty and accountability.”

He then went on to reference two key examples of where the government succeeded in eroding public trust.

The first was the famous Barnard Castle scandal, which saw the Prime Minister’s then-chief advisor Dominic Cummings and his family make a journey from London to County Durham after the start of a national lockdown in March 2020 while they were experiencing symptoms of COVID-19.

This news enraged many members of the public at the time, who had been carefully following government guidelines and who felt there was an unfair double standard.

The second example made reference to a more recent piece of news, which saw the Prime Minister facing a string of allegations of partying and socialising in No 10 while Covid restrictions were in place.

In the article, Piers also pointed out that the Labour party is moving ahead in the polls and that rising prices and taxes were angering even his most fervent supporters.

He wrote: “People aren’t laughing with you any more Boris, they’re either laughing at you or furious with you.

“You’ve waltzed through life telling ­brazen whoppers to escape punishment whenever the manure’s hit the fan either professionally or personally, but you can’t do it now that you’re Prime Minister.

“And every time you try, you further harm your own reputation and that of your government, party, and country.”

Instructing the Prime Minister to “grow a pair”, Piers concluded his tirade against Boris by inviting him on his “new global TV show”.

Piers will be presenting on the new upcoming TV channel TalkTV, which is set to launch early this year.

The journalist used to present on Good Morning Britain before he dramatically walked out of the studio in March 2021.

Piers left the show after he was called out for comments he made about mental health and suicidal ideations that Meghan Markle had discussed in her explosive interview with Oprah Winfrey.