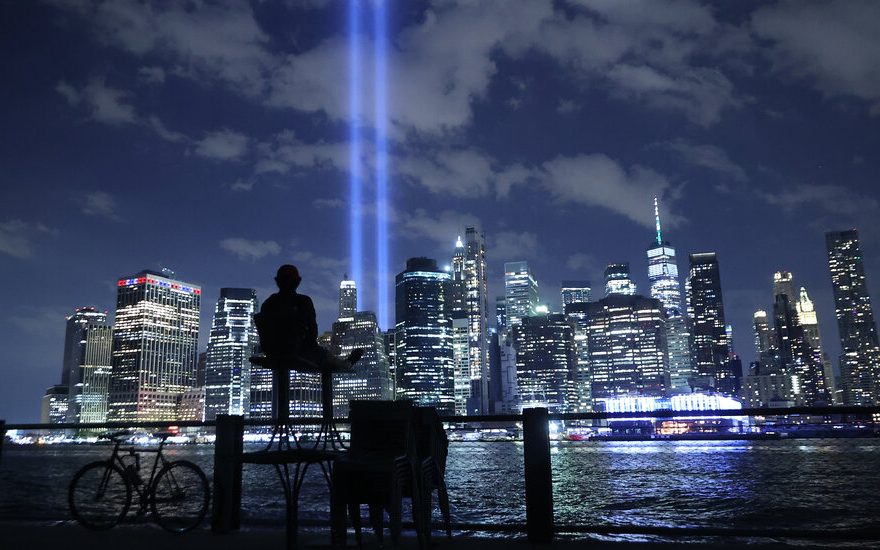 Twenty years after four coordinated terrorist attacks by Al Qaeda killed 2,977 people — 2,753 of them at ground zero in New York City — the nation and the city remember. They remember through dance, music, museums, TV specials and light beamed into the sky.

And especially now, after a war in Afghanistan, the ways we remember move beyond commemoration. They start to connect the dots between the attacks themselves and the larger historical era that followed, and continues to unfold.

History echoes and reverberates in Lower Manhattan, where businesses have shuttered once more, this time because of the pandemic. There, from the rooftop of the Battery Parking Garage, two 48-foot squares of light will recreate the ghostly images of the twin towers this Saturday night.

Here’s a selection of events — both in-person and virtual — for New Yorkers to remember and reflect this year. Check websites for Covid-19 protocols.

The Metropolitan Opera plays Verdi’s Requiem in commemoration often. The last time it was performed there, the piece was in honor of the beloved Russian baritone Dmitri Hvorostovsky.

Before that, the music was presented as a memorial to Luciano Pavarotti (2008), President Kennedy (1964) and Verdi himself (1901). Now, in its first indoor performance for an audience since March 2020, the Met Opera will perform the Requiem on Sept. 11 to commemorate the 20th anniversary of the attacks.

Five hundred free tickets will be made available to the families of victims, and the remaining tickets will be $25. The event will also be broadcast live on PBS, hosted by the ballet star Misty Copeland from the 9/11 Memorial & Museum in Manhattan. From $25; metopera.org.

In the immediate aftermath of the attacks, the New-York Historical Society collected materials — pieces of debris, parts of memorials — as rescues and memorials unfolded. And so began the History Responds initiative, which has since continued to document major events like the Black Lives Matter protests and the Climate Strike.

Now, 20 years later, two ongoing exhibits — “Remembering 9/11” and “Objects Tell Stories: 9/11” — at the museum on Central Park West are showcasing that history. On Saturday, images from the photographic archive “Here is New York,” which documented ground zero in the moment, will be projected on digital displays in the Smith Gallery. $22 for an adult ticket; nyhistory.org.

In 2001, the rubble of the World Trade Center South Tower buried Will Jimeno — a Port Authority of New York and New Jersey police officer — for 13 hours. He survived, as did his partner, John McLoughlin.

Their experiences will comprise part of “Shine A Light,” a one-hour national television special airing on CNN at 7 p.m. on Saturday. The nonprofit 9/11 Day, co-founded by David Paine, announced that the special will be hosted by Jake Tapper and feature performances by H.E.R., Brad Paisley and Common.

“We hope to demonstrate that even in the face of great tragedy, good things can arise,” Paine said in a statement. “That’s an essential and powerful reminder for all of us now, 20 years later, as we continue to deal with other tragic events.” 911day.org.

Every Sept. 11 morning since the 10th anniversary of the attacks, Buglisi Dance Theatre has presented its “Table of Silence” — a free “public performance ritual for peace” — at Lincoln Center. The pandemic hasn’t changed that: Last year, 28 dancers draped in white fabric reached their outstretched arms toward the sky.

Although that event marked the first large-scale performance at Lincoln Center since March 2020, it was closed to the public, available only as a livestream. This year, however, the 8 a.m. performance will feature both live and virtual elements. Limited standing capacity will be available on Josie Robertson Plaza, on a first-come, first-served basis. Free; tableofsilence.org.

Inside Green-Wood Cemetery, the top of Battle Hill — the highest point in Brooklyn and the setting of the largest Revolutionary battle — affords sweeping views of Lower Manhattan, including the World Trade Center. The musical performance “Memory Ground” will take place there on Saturday. The Mississippi-born and New York City-based composer Buck McDaniel will present original compositions. (Previously, his work “Detroit Cycles” premiered with the radio program The Moth.)

Saxophonist Noa Even — whose solo commissioning project, “Atomic,” has toured across the country — will perform, as will the New York City-based string ensemble Desdemona. Each performance is 45 minutes, and will run at noon, 1 p.m. and 2 p.m. $10 recommended donation; green-wood.com.

Latvian composer Eriks Esenvalds’s song “Earth Teach Me Quiet” begins with the line “Earth teach me quiet — as the grasses are still with light.”

The Crossing, a new-music choir, will perform pieces by Esenvalds, Ayanna Woods, Michael Gilbertson and James Primosch on Saturday at 7 p.m. at the Presbyterian Church of Chestnut Hill in Philadelphia.

While the event, “Returning” may not explicitly address the terrorist attacks, its themes — isolation, grief, confusion, hope and returning — are more than fitting. This “coming home to song” marks the opening of the Crossing’s back-to-live-performance season, in the spirit of return and renewal. $35 for general admission; thecrossing.ticketleap.com.

A ‘Tribute in Light’ Across the City

At sunset on Saturday, 88 7,000-watt light bulbs will reach four miles into the sky from the roof of the Battery Parking Garage, mirroring the shapes of the twin towers.

This Tribute in Light, organized by the 9/11 Memorial & Museum, was first presented six months after the attack. Each year after that, the ghostly echoes of the towers have lighted up Lower Manhattan from dusk until dawn on the evening of Sept. 11.

Buildings throughout the city, including the Empire State Building, One World Trade Center, the Metropolitan Opera, Lincoln Center Plaza and the New-York Historical Society will join in the memorial by lighting up their facades and rooftops in sky blue.