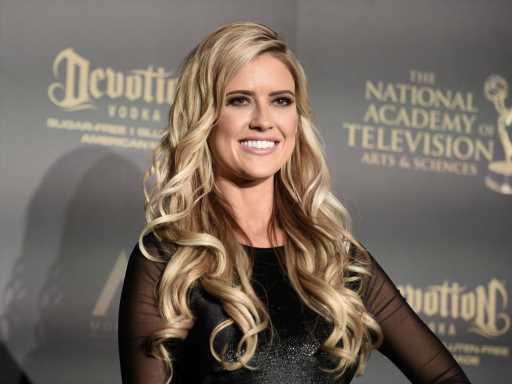 Christina Anstead’s dating life has been the subject of fascination for years now, not least due to her unconventional choice to co-star with ex-husband Tarek El Moussa in reality show Flip or Flop long after their romance fizzled. But it was another show of Christina’s, Christina on the Coast, that introduced us to her more recent ex-husband Ant Anstead, who seemed for a while like the happily-ever-after she had been looking for. When trouble in paradise struck there too, and with the circumstances of her divorce from Tarek still remaining somewhat mysterious, many have looked back to Christina’s dating history and wondered what they might have missed in the seemingly happy weeks that led up to both unexpected splits.

Come 2020, Christina and Ant are both single agents co-parenting their 1-year-old son Hudson, while ex Tarek is engaged to fiancée Heather Rae Young, who’s also co-parenting son Brayden and daughter Taylor with Christina. It’s a modern family for sure, and one we have the luxury of watching across multiple reality shows (including Heather’s Selling Sunset). But as Christina takes some time to decide who her next partner might be, we’re looking back at the blonde stunner’s complicated history of heartbreak, breakups, and new love.

Before we ever knew Christina Anstead, we knew Christina El Moussa (née Christina Meursinge Haack, should anyone be wondering like we were). She and Tarek first met when he was dating someone else and they were both working in real estate after college, so the date they met isn’t the date they started dating — but luckily, Christina provided that for us too.

“The day Tarek and I officially started dating, which was October 9, 2006, we moved in together,” Christina told GoodHousekeeping.com. Three years later, the couple married in 2009 and welcomed their daughter Taylor in 2010. By 2013, they were kicking off their hit real estate show Flip or Flop — but the year brought serious heartache to the couple too.

That year, Tarek was diagnosed with cancer via a nurse spotting a lump on his thyroid on Flip or Flop and suggesting he seek medical help. He and Christina were also trying to conceive a second child, having lost one pregnancy in 2014 and undergoing another round of in vitro fertilization at the same time that Tarek was in cancer treatment.

“I lost 60 pounds, I was on Vicodin every day,” Tarek told The Dr. Drew Podcast of those years. “On top of that, my hormones are off, I’m on pain meds and narcotics, and I’m filming and working. It was a really rough three, four years … It was a horrifying experience.”

In 2015, they welcomed son Brayden, but their moment of bliss was short-lived as the pressures of working full-time caved back in on both of them. The couple underwent counseling after a frightening incident in 2016 that involved the police showing up after Tarek left the house with a gun (he later claimed it was a misunderstanding). They sought counseling, but ultimately split in December 2016, with Tarek filing for divorce in January 2017 and citing irreconcilable differences.

Around 2015, which we now know to be a not-so-stable time for Tarek and Christina, they hired a contractor named Gary Anderson to work on their pool. In the months that followed, sources told InTouch that Tarek was growing jealous of Christina’s attentions toward Anderson.

“Tarek saw Christina’s phone and [believed] there was some inappropriate texting going on between Christina and Gary,” the source claimed, adding that they believed their infamous 2016 incident was sparked by this conflict. Once Christina and Tarek split for good in 2016, they denied these rumors, stating: “Neither of us was involved in a romantic relationship with any third party prior to our separation, or believes the other was.”

But just a few months after their split, Christina revealed that she was dating Anderson, and the match was reportedly tough for Tarek to stomach.

“It’s hard for Tarek to see Christina dating, but it’s even worse that Gary is the guy she’s with,” another source told InTouch. “There’s nothing that could be more upsetting to Tarek than to see her with a guy who is like him but better — and that’s Gary. He’s in the same industry as Tarek, but he’s older and more established and has more money.”

Fortunately for Tarek, this relationship didn’t last long and they were on the rocks by May, with a friend of Anderson’s claiming the contractor “doesn’t even like being around [young kids]” like Taylor and Brayden. And that sure sounds like a good reason for a single mom to break up with someone to us.

Our next suitor for Ms. Christina? Anaheim Ducks hockey player Nate Thompson, who also had a short-lived romance with Real Housewives of New York City star Bethenny Frankel. This blip in Christina’s dating history was basically over as soon as it happened, with her enduring love for Ducks games leading fans to think the relationship went on for longer than it really did.

“Nothing dramatic happened — it was super casual from the start, and they were never an official couple to begin with,” one source told Entertainment Tonight in 2017. “Bad timing on both their ends never really let it evolve into something serious. They remain friends and there are no bad feelings between them at all.”

While Christina first dated Doug Spedding in her 23-and-under days (otherwise known as B.T., or Before Tarek), we mainly know him as the guy she was cuddled up with on the 4th of July the year after her Tarek divorce. This relationship, while longer than her fling with Thompson, only lasted around five months before life got in the way, this time in the form of Spedding checking into an inpatient rehabilitation center for addiction that October.

“Christina supports Doug’s decision to seek treatment and remains in contact to support his recovery,” her representative told Us Weekly at the time.

And then there was Ant. In January 2018, Us Weekly confirmed that Christina was dating the UK-born Wheelers Dealers host, who shared kids Amelie and Archie with ex-wife Louise Herbert.

“Tarek likes him,” Christina told Us at the time. “What’s not to like? Everybody likes him. He’s a great guy. [My kids] love him. His kids are amazing. Like I said, he’s a great dad … His kids are very grounded and they’re very polite. They’re great kids.”

By December 2018, Ant and Christina had tied the knot at their California home in an intimate setting, and told the world that their meeting through a mutual friend was fate. By January 2019, Christina El Moussa had become Christina Anstead, and by March 2019, Christina was showing off the first ultrasound for the baby who would become Hudson Anstead.

In September 2019, they welcomed baby Hudson, and his first seemed from the outside to be full of grateful family moments and exciting milestones. But just a year later, the couple announced they were separating in September 2020.

“Ant and I have made the difficult decision to separate,” Christina wrote on Instagram. “We are grateful for each other and as always, our children will remain our priority. We appreciate your support and ask for privacy for us and our family as we navigate the future.”

In November, she filed for divorce from the TV host and has since resumed filming Flip or Flop with ex Tarek El Moussa. Ant has hinted on social media that the split was not his idea, but since seems committed to moving on and putting baby Hudson’s needs first.

Thus far, there doesn’t seem to be a Gary Anderson figure on the horizon who we could expect to debut their relationship with Christina in coming weeks. Between co-parenting with her first ex-husband and co-parenting with her second ex-husband, she’s got a lot on her plate. And with the whirlwind history we’ve just laid out, we’re in full support of her taking a breaking from dating for however long she needs.