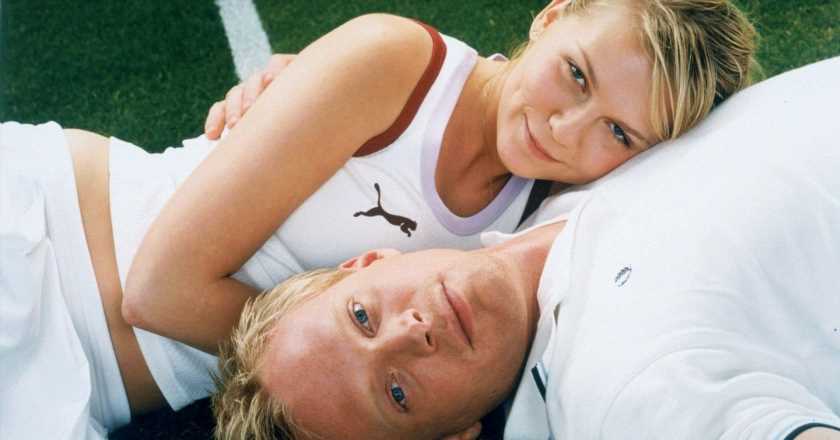 Wimbledon opened to middling reviews when it first hit cinemas in 2004, but every summer we rewatch the romcom without fail. What gives?

Summer is well and truly in full swing, as Wimbledon (known to many as the greatest show on turf) is back on our TV screens after two years. Which means, yes, we suddenly have an uncontrollable urge to wear tennis whites, sip Pimm’s, and eat nothing but strawberries and cream. What of it?

Whether you’re an avid fan of tennis’ most prestigious tournament or not, you’ll no doubt be aware that the sporting event’s return will undoubtedly be marked with several reruns of 2004 romantic comedy film, Wimbledon. Because it is to July what Christmas romcoms are to December, apparently.

3 winning strawberry recipes that channel the spirit of Wimbledon

For those who’ve somehow managed to go without seeing the film even once over the past 17 years (and, if this is you, how?), here’s a quick breakdown of the plot; Peter Colt (Wandavision’s Paul Bettany) is a low-ranking sports star whose misfortune on the court is only matched by his​ hopelessness with the opposite sex.

He always says the wrong thing, to everyone. He permanently has his tennis shoe-clad foot in his mouth. And he frequently stumbles when rushing to return the easiest of serves (in every sense of the word).

It feels utterly baffling, then, when Lizzie Bradbury (Kirsten Dunst) – the cooler female version of John McEnroe, I guess – spots Peter from afar and promises him a “workout” unlike any other (wink wink, nudge nudge) if he can hit a target of her choice. He fails, the OG bad girl of tennis struts off to meet up with ‘daddy’ (her actual father, I promise, and not… y’know, a daddy), and that’s that.

Except, much like The Notebook, this love-lust connection isn’t over; not by a long shot. As luck would have it, the pair run into one another again, and, as sparks inevitably begin to fly, something changes for Peter.

Suddenly, our journeyman of tennis is feeling more than ready to take on the world’s younger, better players and show them who’s boss on the courts. Suddenly, without warning, he rediscovers his passion for the professional sport. And suddenly, he’s not so much a wildcard as he is an actual contender for Wimbledon champion.

Naturally, things do not run smoothly; Lizzie’s aforementioned dad (a very frowny Sam Neill) deeply disapproves of their blossoming romance and, when someone spills the beans about their coupling to the tabloids, Lizzie – struggling to deal with her own court-based disappointment – sees red, and fittingly in true McEnroe-style.

Relationship over, again. End of. Kaput. But (and here’s that The Notebook line again) it still isn’t over, damn it!

Yeah, it’s not really a spoiler, given the nature of the genre, but everything works out in the end. So, considering the film’s middling reviews, A-B plot, and unerring ability to hit basically every trope going, you’d be forgiven for thinking that Wimbledon isn’t all that much.

Kirsten Dunst and Paul Bettany play the star-crossed lovers at the centre of Wimbledon.

Well, Peter Colt is basically the anthropomorphic representation of the film itself. On paper, neither sounds like it has the makings of a winner, and yet, somehow, both have achieved dizzying success. The former, of course, wins the tennis championship and the heart of his beloved, while the latter has been tenderly rewatched year after year after bloody year by avid fans ever since it first opened in cinemas.

So, what’s the secret? I reckon I’ve figured it out; Peter and Wimbledon both possess positively bucketloads of charming awkwardness. The same charming awkwardness, in fact, that fans of the British romcom have long been obsessed with, ever since Hugh Grant first stammered out an “I think I love you, and eh, I… I just wondered if by any chance you wouldn’t like to… eh?” in Four Weddings And A Funeral.

Serve a sartorial ace this summer with a tennis skirt, fashion’s latest – and most playful – flirtation

Without this earnestness, the whole love story – which, let’s face it, basically boils down to 14 days of drunken shagging and adrenaline-fuelled arguments – would most likely fall apart. We’d be too busy wondering how, exactly, the duo are able to take so many days off from the high-stakes sports championship they’re both playing in. We’d be worrying about the impact all those late-night workouts (ha!) would have on their performance the next day. We’d also, too, wonder why the British public were so incredibly chill about the fact that one of their own was in the final; where the hell is the media hoopla?

With it, though, we’re much more likely to fixate on the tender glances that the fledgling couple dart at one another as they stroll through Hyde Park, the dreamy gazes on their faces as they lie tangled up in post-coital bliss together, and their sheepish shuffling into the “love department” (their words, I swear, and not mine. I would never).

In fact, it’s the clumsiness of their relationship that gives Lizzie and Peter their inexplicable, yet oh-so-palpable, chemistry. Admit it; an onscreen couple – even one as ridiculously glossy and privileged as this – feels one hell of a lot more believable when they’re joking about fish ‘n’ chips and quick shags. Way more so than they do when they’re doing that “Don’t apologise to me, I love you” bit in the locker rooms, anyway. (I’m genuinely willing to bet big money that no one outside a movie script has feigned disbelief and urged their significant other to repeat their first ever ‘I love you’ with a wide-eyed, “What did you say?”).

It’s no Richard Curtis or Nora Ephron flick, true, but it’s ours. It’s as much a part of the IRL Wimbledon as the strawberries and the sunburn and the eerily silent crowds as the balls thwack from one side of the court to the other. And, even though our characters insist that “in tennis love means nothing,” the strange romance at the centre(court) of the film somehow means everything to us every single summer, dragging us in like unwitting moths to a flame.

Wimbledon demands that we give a damn about these very wealthy, very glamorous, very horny athletes – and we do, without fail. Long before the credits roll, we find ourselves wanting Peter and Lizzie to make this, whatever this is, work. We want them to beat the odds. We want them to reunite with a steamy snog in front of everyone. We want it all with every fibre of our being, damn it! And we want it far more so than we want Pete to win the championship (it’s just not the same with all those computer-generated tennis balls pinging around the place, is it?).

So give the wildcard a go, if you haven’t already; it might just surprise you. Then again, it might not. Either way, you’ll be pleasantly distracted from the real world for an hour and 40 minutes and, really, isn’t that all anyone wants right about now?

Wimbledon is available to rent on Amazon Prime Video right now, for the princely sum of £3.59.