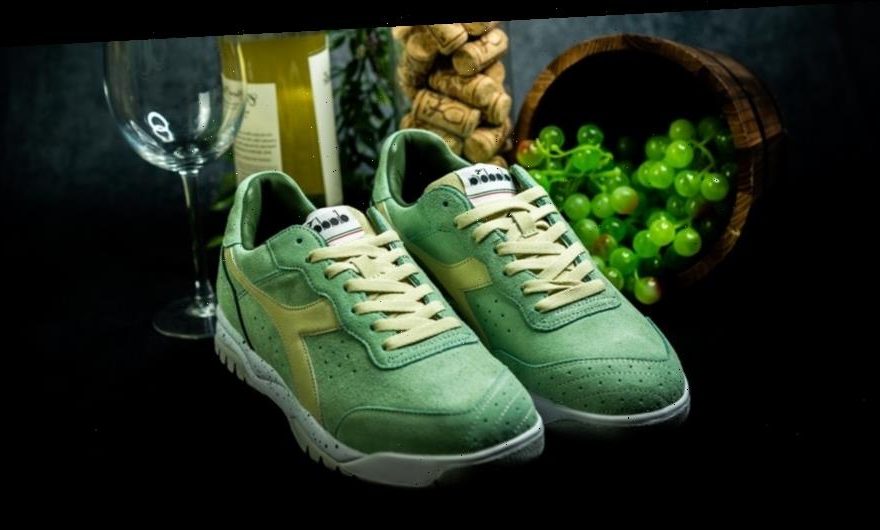 Artist Anderson Bluu and Diadora are toasting to the good life with a wine-inspired two-shoe collection. Made up of a Maverick “Chardonnay” and N.9002 “Cabernet,” the collection nods to the parallels between wine and sneaker collecting — namely that both often go up in value with age — and also salutes Diadora’s Italian roots, as Italy is responsible for more than 50 percent of the world’s wine.

The Maverick “Chardonnay” is dressed in soft green suedes, a tact acknowledgement of the green grape skin used to produce white wine. It also features faint yellow hues on the tongue, laces and midfoot logo plus speckled detailing on the midsole. On the other hand, the N.9002 “Cabernet” is done up in rich blue suedes to salute the dark navy grapes used in the creation of red wine. There’s an Anderson Bluu logo on the left heel (Bluu is left-handed), and a grape graphic on the right. Each pair is completed by premium cork insoles with branded hits for a direct nod to wine bottle corks, and packaged in a shoebox that mirrors a wine barrel.

Look for the Anderson Bluu x Diadora Maverick “Chardonnay” and N.9002 “Cabernet” to release exclusively at Footaction come March 24. The MSRP for each pair is set at $150 USD.