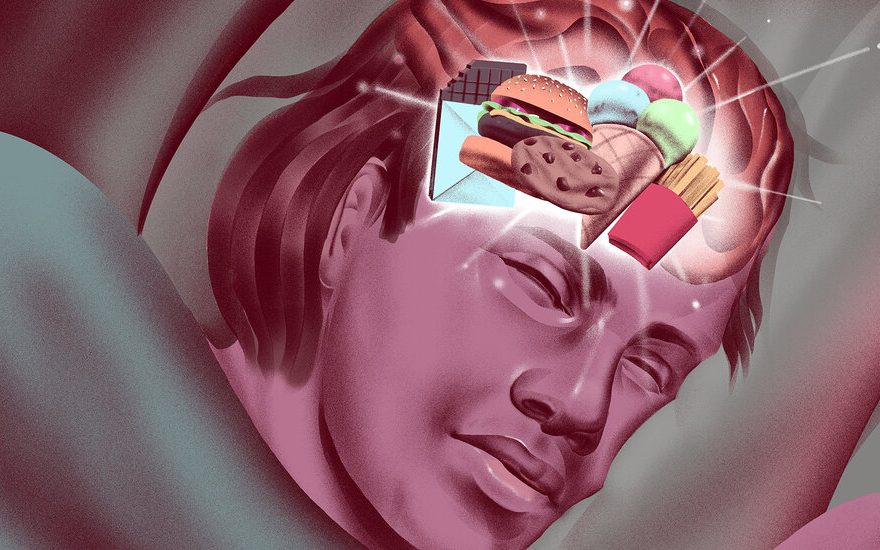 Five years ago, a group of nutrition scientists studied what Americans eat and reached a striking conclusion: More than half of all the calories that the average American consumes comes from ultra-processed foods, which they defined as “industrial formulations” that combine large amounts of sugar, salt, oils, fats and other additives.

Highly processed foods continue to dominate the American diet, despite being linked to obesity, heart disease, Type 2 diabetes and other health problems. They are cheap and convenient, and engineered to taste good. They are aggressively marketed by the food industry. But a growing number of scientists say another reason these foods are so heavily consumed is that for many people they are not just tempting but addictive, a notion that has sparked controversy among researchers.

Recently, the American Journal of Clinical Nutrition explored the science behind food addiction and whether ultra-processed foods might be contributing to overeating and obesity. It featured a debate between two of the leading experts on the subject, Ashley Gearhardt, associate professor in the psychology department at the University of Michigan, and Dr. Johannes Hebebrand, head of the department of child and adolescent psychiatry, psychosomatics and psychotherapy at the University of Duisburg-Essen in Germany.

Dr. Gearhardt, a clinical psychologist, helped develop the Yale Food Addiction Scale, a survey that is used to determine whether a person shows signs of addictive behavior toward food. In one study involving more than 500 people, she and her colleagues found that certain foods were especially likely to elicit “addictive-like” eating behaviors, such as intense cravings, a loss of control, and an inability to cut back despite experiencing harmful consequences and a strong desire to stop eating them.

At the top of the list were pizza, chocolate, potato chips, cookies, ice cream, French fries and cheeseburgers. Dr. Gearhardt has found in her research that these highly processed foods share much in common with addictive substances. Like cigarettes and cocaine, their ingredients are derived from naturally occurring plants and foods that are stripped of components that slow their absorption, such as fiber, water and protein. Then their most pleasurable ingredients are refined and processed into products that are rapidly absorbed into the bloodstream, enhancing their ability to light up regions of the brain that regulate reward, emotion and motivation.

Salt, thickeners, artificial flavors and other additives in highly processed foods strengthen their pull by enhancing properties like texture and mouth-feel, similar to the way that cigarettes contain an array of additives designed to increase their addictive potential, said Dr. Gearhardt. Menthol helps to mask the bitter flavor of nicotine, for example, while another ingredient used in some cigarettes, cocoa, dilates the airways and increases nicotine’s absorption.

A common denominator among the most irresistible ultra-processed foods is that they contain large amounts of fat and refined carbohydrates, a potent combination that is rarely seen in naturally occurring foods that humans evolved to eat, such as fruits, vegetables, meat, nuts, honey, beans and seeds, said Dr. Gearhardt. Many foods found in nature are rich in either fat or carbs, but typically they are not high in both.

“People don’t experience an addictive behavioral response to naturally occurring foods that are good for our health, like strawberries,” said Dr. Gearhardt, director of the Food and Addiction Science and Treatment lab at the University of Michigan. “It’s this subset of highly processed foods that are engineered in a way that’s so similar to how we create other addictive substances. These are the foods that can trigger a loss of control and compulsive, problematic behaviors that parallel what we see with alcohol and cigarettes.”

In one study, Dr. Gearhardt found that when people cut back on highly processed foods, they experienced symptoms that were comparable to the withdrawal seen in drug abusers, such as irritability, fatigue, feelings of sadness and cravings. Other researchers have found in brain imaging studies that people who frequently consume junk foods can develop a tolerance to them over time, leading them to require larger and larger amounts to get the same enjoyment.

In her clinical practice, Dr. Gearhardt has encountered patients — some obese and some not — who struggle in vain to control their intake of highly processed foods. Some attempt to eat them in moderation, only to find that they lose control and eat to the point of feeling ill and distraught. Many of her patients find that they cannot quit these foods despite struggling with uncontrolled diabetes, excessive weight gain and other health problems.

“The striking thing is that my clients are almost always acutely aware of the negative consequences of their highly processed food consumption, and they have typically tried dozens of strategies like crash diets and cleanses to try and get their relationship with these foods under control,” she said. “While these attempts might work for a short time, they almost always end up relapsing.”

But Dr. Hebebrand disputes the notion that any food is addictive. While potato chips and pizza can seem irresistible to some, he argues that they do not cause an altered state of mind, a hallmark of addictive substances. Smoking a cigarette, drinking a glass of wine or taking a hit of heroin, for instance, causes an immediate sensation in the brain that foods do not, he says.

“You can take any addictive drug, and it’s always the same story that almost everyone will have an altered state of mind after ingesting it,” said Dr. Hebebrand. “That indicates that the substance is having an effect on your central nervous system. But we are all ingesting highly processed foods, and none of us is experiencing this altered state of mind because there’s no direct hit of a substance in the brain.”

In substance use disorders, people become dependent on a specific chemical that acts on the brain, like the nicotine in cigarettes or the ethanol in wine and liquor. They initially seek out this chemical to get a high, and then become dependent on it to alleviate depressed and negative emotions. But in highly processed foods, there is no one compound that can be singled out as addictive, Dr. Hebebrand said. In fact, evidence suggests that obese people who overeat tend to consume a wide range of foods with different textures, flavors and compositions. Dr. Hebebrand argued that overeating is driven in part by the food industry marketing more than 20,000 new products every year, giving people access to a seemingly endless variety of foods and beverages.

“It’s the diversity of foods that is so appealing and causing the problem, not a single substance in these foods,” he added.

Those who argue against food addiction also point out that most people consume highly processed foods on a daily basis without showing any signs of addiction. But Dr. Gearhardt notes that addictive substances do not hook everyone who consumes them. According to research, about two-thirds of people who smoke cigarettes go on to become addicted, while a third do not. Only about 21 percent of people who use cocaine in their lifetimes become addicted, while just 23 percent of people who drink alcohol develop a dependence on it. Studies suggests that a wide range of factors determine whether people become addicted, including their genetics, family histories, exposure to trauma, and environmental and socioeconomic backgrounds.

“Most people try addictive substances and they don’t become addicted,” Dr. Gearhardt said. “So if these foods are addictive, we wouldn’t expect that 100 percent of society is going to be addicted to them.”

For people who struggle with limiting their intake of highly processed foods, Dr. Gearhardt recommends keeping a journal of what you eat so you can identify the foods that have the most pull — the ones that cause intense cravings and that you can’t stop eating once you start. Keep those foods out of your home, while stocking your fridge and pantry with healthier alternatives that you enjoy, she said.

Keep track of the triggers that lead to cravings and binges. They could be emotions like stress, boredom and loneliness. Or it could be the Dunkin’ Donuts that you drive by three times a week. Make a plan to manage those triggers by a taking a different route home, for example, or by using nonfood activities to alleviate stress and boredom. And avoid skipping meals, because hunger can set off cravings that lead to regrettable decisions, she said.

“Making sure you are regularly fueling your body with nutritious, minimally processed foods that you enjoy can be important for helping you navigate a very challenging food environment,” said Dr. Gearhardt.